Tony’s Coronavirus notes: Fortress Australia – getting in & out & getting locked down during the pandemic


Fortress Australia has been much in the news of late, here in Australia and elsewhere in the world. We’ve slammed the doors shut and nobody is allowed in or out, as the BBC reports. Well not quite. While Joe Bloggs – that hypothetical Mr Everyman – and his partner Jane may have lots of trouble getting out of Australia and even more trouble getting in to Australia, particularly if they’ve been in India recently, lots of sports stars, movie stars or plain old billionaires seem to have no trouble arriving and departing. The Sydney Morning Herald reported on how the private jets were shuttling in and out while ordinary citizens weren’t allowed to come home.

A recent story on Zac Efron, some sort of movie star, revealed that he’d sold his Los Angeles mansion and bought somewhere near the beach in Byron Bay. During the course of the pandemic he’d been in and out of Australia three times. Some of those identities – to use that useful Australian terminology – don’t even have to stoop to the indignity of hotel quarantine, according to another Sydney Morning Herald report. They may still have to lock themselves away for 14 days from arrival, but it can be at their own place or at somewhere else suitably salubrious.

Doing that doesn’t come cheap, figures up to half a million dollars have been quoted if you want the whole thing for a group, paperwork, house, food and, of course, the mandatory police presence to ensure you don’t sneak out. Check Concierge Doctors or 3rd Rock Ent who have a website devoted to all the things they can organize for you including sorting out government problems. I’m amazed somebody hasn’t taken over some Barrier Reef resort and turned it into a discrete, luxury quarantine station?

Not all ‘identities’ opt for the lux treatment although at various levels Dannii Minogue (Kylie’s sister), Ed Sheeran, Sacha Baron Cohen, Nicole Kidman, Julia Roberts, Mark Wahlberg and Matt Damon went private. On the other hand Kylie Minogue did her time in ‘regular hotel quarantine’ in Melbourne and Rachel Griffiths went to the ex-army Howard Springs camp outside Darwin in the Northern Territory. Remarkably, if you have a choice, Howard Springs seems to be the place to go.

▲ A police car escorts a SkyBus bringing quarantine detainees to Melbourne’s Element Hotel in Burnley Gardens, Richmond, Melbourne. That’s a quarantine hotel only a stone’s throw from my front door.

Reportedly Melbourne seems to be the place not to go, you get what you’re given, no negotiating a better room, or even one with opening windows. 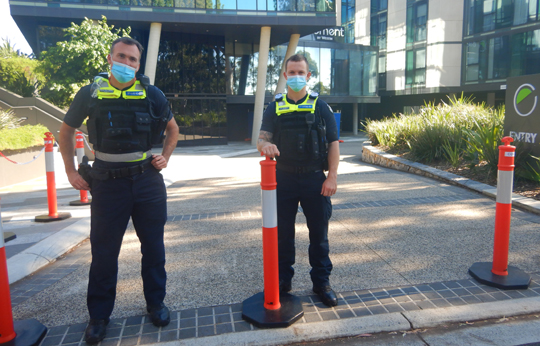 Of course my biggest pandemic disappointment is simply being locked down in Australia. Periodically just in Melbourne and – right now – just in a 25km radius from my front door, it was 10km and before that it was 5km. But I’m even more disappointed that in fact I am not locked down in Australia. During the past year Australia has ceased to exist. We’ve become citizens of Victoria, New South Wales, Queensland, Tasmania, South Australia or, worst of all, Western Australia. Silly statements like ‘we’re all in this together’ are bandied around when it’s often very clear that we are not all in this together at all. At the slightest excuse the barriers are slammed shut between state borders. Right now, if I wasn’t locked in to my circle in Melbourne there would be no way I could go to another state. Particularly Western Australia. 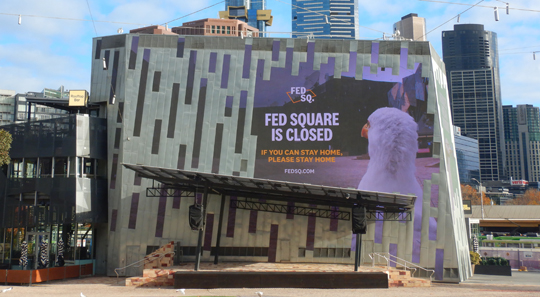 ▲ Locked down in Melbourne, a ‘go home’ message in Federation Square in the centre of Melbourne 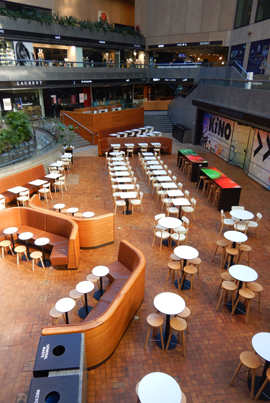 ◄ And the empty scene – usually it’s crowded – at Collins Place in the centre of Melbourne at the height of our recent lock down.

The virus case that kicked off Melbourne and Victoria’s recent lock down came from South Australia. Some unfortunate arrival underwent hotel quarantine in South Australia and, once again, the quarantine hotel proved to be just another land-locked cruise ship. You check in (virus free) and while you’re staying for your 14 days you pick up the virus from somebody in another room. Just like on a cruise ship. Then you check out, as this unfortunate did, go home to Melbourne and discover you’re infected. So what does the guilty party – South Australia with its unhealthy hotel – do? They shut the borders to anybody from Victoria. We’re all in this together? Huh!

Which from the UK perspective – where they rate countries as red, amber or green – would make us the very greenest shade of green. Even Israel, the country which is the star case for vaccinations, has a new case rate of 1.5 per million population, about 5 times as bad as Victoria. Other squeaky-green countries include Iceland at 6 new cases per million population and Singapore at 2. The UK itself? Currently over the last 7 days around 100 cases per million!

We may be keeping the lid on new virus cases, but what all of Australia is doing really badly is vaccinating. It’s down to government failure, more the national government than at the state level, but they’re all hopeless. As a result the percentage of the population with one/two vaccinations (figures from Our World in Data) is currently Israel 63/59, Canada 63/11, UK 61/43, USA 52/42, Germany 47/25 and Australia 19/3 – which is to say the Australia figures are shockingly bad. Meanwhile the national government is insisting that it’s all fine, there’s no hurry: ‘it’s not a race.’ Clearly it is a race and Taiwan, for a long spell a keep-the-virus-away star which, like Australia, has done a bad job of rolling out vaccinations, is currently proving exactly why it is indeed a race.

Still one Covid19 related thing has definitely improved in Melbourne of late. Daniel Andrews has shut up. Mr Andrews is our state premier and for months he was constantly in one press conference after another, reporting at exhaustive length what his government was doing. At one stage that meant watching over deaths in aged care facilities. Of 910 Covid19 deaths in Australia in total (really a very good figure, that’s 35 per million population when Covid19 deaths in the USA or UK are close to 2000 per million) 820 of them were in Victoria. Almost all in Melbourne, when state government quarantine failures led to the virus escaping into aged care homes. Then on 9 March 2021, so over three months ago, Mr Andrews took a spill down wet stairs at his holiday home and since then he’s been amazingly quiet. 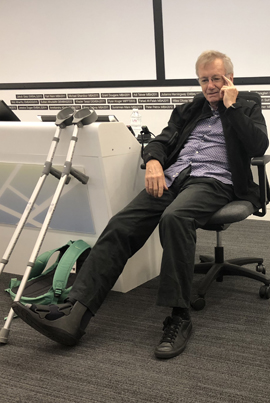 For a long time there were virtually no statements on how he was getting on or when he’d be back at the controls. Right now they’re saying in 2 weeks’ time but in the interim he was being called Daniel Brezhnev, after the ex-Soviet leader Leonid Brezhnev, who seemed to disappear from view for a long time before it was finally admitted that he was actually dead. Daniel Andrews is clearly not dead, but politics is definitely a place where the rule that ‘nature abhors a vacuum’ applies. Into the vacuum created by his totally silent absence an amazing avalanche of wild rumour and speculation poured in. It will make a good book one day.

◄ PS – I took my own spill down wet stairs back in 2018 and although I escaped much more lightly than Mr Andrews I did spend a long time hobbling around on crutches with my broken ankle.