Living right on the Yarra River in Melbourne – or close to it over the years – I’m very aware of its varied moods. Most of the time it’s flowing very slowly by the time it gets to me. I’m always surprised, a few km upriver, how it’s always flowing rapidly as it comes over Dight’s Falls in Abbotsford. The river is tidal up as far as the falls, so the flow can vary considerably with which way the tide is going. Back in Australia’s indigenous period, before we ‘new Australians’ turned up and started modifying things, the waterfall which defined the river’s tidal zone was much further downstream, closer to the sea, in the middle of what is the city of Melbourne today. I did some Yarra River exploring during the early months of the pandemic last year and 10 years earlier Maureen and I went out on a boat with the Yarra River Riverkeeper.

When we’ve had a spell of heavy rain the river can flow much faster – and much higher – than usual. A suprising amount of debris can float by, certainly big tree branches although I’m still waiting to spot a dead cow floating. When I was on the Hawkesbury River, just north of Sydney, a couple of months ago and just after major floods there we were told about fridges floating by, heading to the sea. 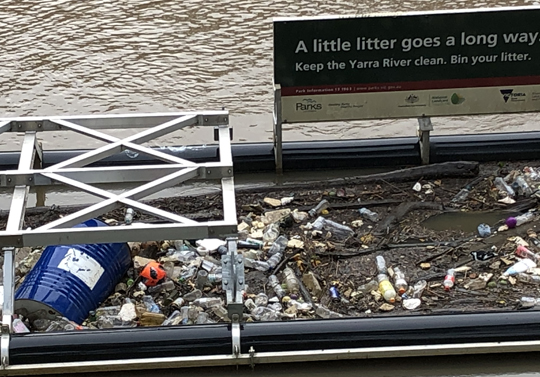 ▲ Even in quiet times there are trash catchers moored at strategic points down the river to snare the plastic debris that regularly floats down. When I checked this one recently it had also captured a surprisingly large oil drum

All sorts of wildlife comes down to the river, apart from lot of birdlife – an impressive flight of black cockatoos just yesterday – I’ve encountered assorted large lizards and once a surpisingly large snake wriggled its way across the river in front of my kayak. 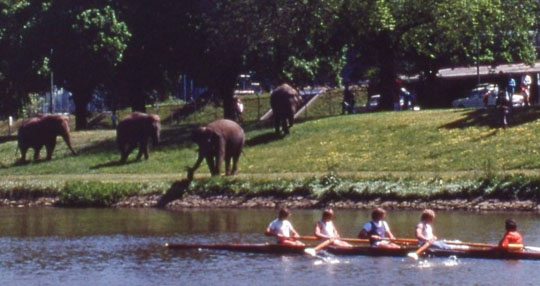 ▲ On one occasion, many years ago now, I came across this parade of elephants. That was back when circuses used to feature animal acts and a circus had raised their big top close to the banks of the Yarra, where the AAMI Park stadium is today. 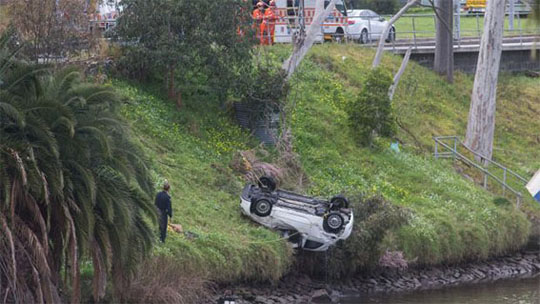 ▲ Every now and then someon manages to drive into Yarra, sometimes with fatal results. I’ve come across several Yarra automotive duckings over the years. Four years ago, pedalling along the Yarra River bicycle track near my home, I came to the scene of a recent accident. A woman in a Fiat 500 took the Yarra Boulevard freeway exit and at the top of the exit failed to stop, crossed both lanes of the road, vaulted over (how?) the Armco barrier, crossed the bicycle track (both lanes), through the fence and down (steeply) into the Yarra River. Where the car sank, fortunately she swam to the riverbank and was taken to hospital. How did all that happen? (photo by Paul Jeffers)

▲ Two years earlier pedalling along that same riverside cycle path, but a bit closer to the city, I came upon this interesting feat of car parking. I’d pedalled by there on my way to the gym and an hour later pedalled back only to discover the bicycle track blocked. I was very glad I wasn’t riding by when he (or she) decided to park there.