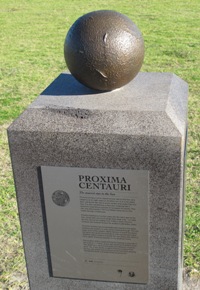 The Melbourne Solar System has extended by a few light years to Proxima Centauri.

◄ The new model of Proxima Centauri, our nearest star.

Helping to put together the Melbourne Solar System, a one to one billion scale model of the Solar System was one of my favourite projects in recent years. You can start on the bayside in St Kilda (Melbourne’s backpacker central) and head out past Mercury (58metres), Venus (108metres), Earth (150metres) and Mars (227metres), the four inner planets, and then continue to the outer ones, finally reaching lonely Pluto 5.9km away and two suburbs along the bay.

Now the model has been extended by 4.2 light years. Which is 40 trillion km or, at our one to one billion scale, about 40,000km. Start at the model of the sun, make a complete circuit of the earth, passing over the south and north pole, and 40,000km later you’ll find yourself right back where you started, with a model of the nearest star to our own star, the Sun.