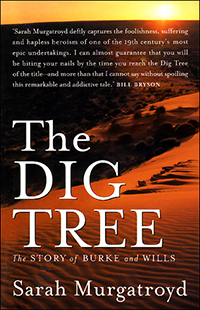 Back in 1991 Maureen and I, with our daughter Tashi (10 years old at the time) and our son Kieran (aged 8), set out to drive from Melbourne to Cooper Creek near the town of Innamincka in South Australia. We were following the track of the Burke & Wills expedition, easily Australia’s most famous – and most disastrous – journey of exploration. Along the way I read Alan Moorehead’s classic Cooper’s Creek about the ill-starred journey. I’ve just finished reading Sarah Murgatroyd’s The Dig Tree, which tells the tale with a more modern outlook, including looking at the expedition’s interaction with the Aboriginals they encountered along the route. 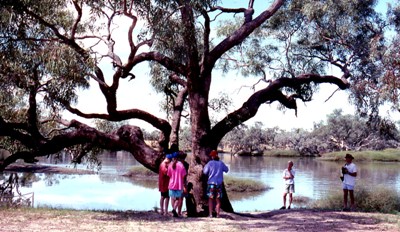 ▲ The ‘Dig Tree’ still stands beside Cooper Creek, I took this photo in 1991.

The Burke & Wills Expedition left Melbourne in August 1860, burdened by far too many supplies, not enough animals to transport those supplies, far too late in the season after numerous delays in getting the expedition together, with inexperienced personnel and an unproven leader and, as it would turn out, a fatal lack of organisation. Part of the expedition never got further than Menindee in New South Wales, but eventually a camp was established at Cooper Creek in Queensland. 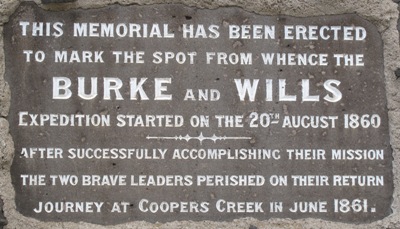 ▲  A memorial in Melbourne’s Royal Park marks where the expedition set off.

In December 1860, at the height of the Australia summer, four men set out from Cooper Creek to make a three month race to the north coast of Australia and back. In fact the trip took four months and one man died on the way back. On 21 April 1861, Robert O’Hara Burke, William Wills and John King staggered back to the camp at Cooper Creek. The camp was abandoned and they discovered the word ‘Dig’ carved into the tree at the campsite. A trunk buried beside the tree contained food and supplies and the terrible news that the camp personnel had left only hours earlier. Although the word ‘Dig’ is no longer visible on the tree the camp’s number, ‘LXV’ (camp 65) is still visible today, 150 years later. 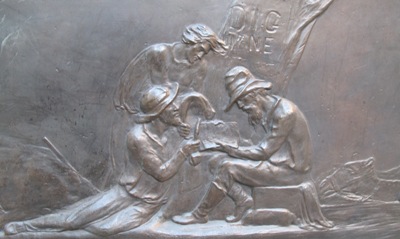 ▲ Burke, Wills and King discover the bad news at the Dig Tree. This plaque is on the Burke & Wills monument in the centre of Melbourne.

It was five months before a search party returned to Cooper Creek and in the interim Burke and Wills had both died, King had been looked after by an Aboriginal tribe at the creek.