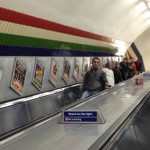 In New York recently I was musing how nobody seemed to walk on escalators and whether it was a cultural thing if you stand or walk? I’m an impatient person and also I reckon I could always do with some more exercise, so I will almost always walk. If there’s the option...