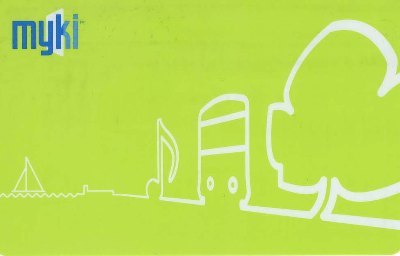 On 29 December 2012 Melbourne switched completely to its Myki travel card system. If you want to travel on Melbourne public transport you need a Myki card. I’ve had mine for three years and I compared it with my London Oyster card back in early 2010. I mentioned how outrageously expensive getting Myki up and running had been, three times as much as London’s big Oyster Card system. It’s probably way more than four times now, Myki’s total cost is now north of US$1.5 billion!

• For a start there’s no alternative. London (Oyster) and Hong Kong (Octopus) both let you buy a single trip train, bus, tram or whatever ticket. That one trip might be all a visitor needs. In Melbourne you have to lay out A$6 (just over US$6) before you can even think about what the fare is going to be for your trip. If you decide you actually want a card in London it’s £3 (US$5 for a visitor), £5 (US$8) for a regular Oyster card – no idea what the difference is! In Hong Kong the card is HK$50 (US6.50).
• OK, so the Melbourne Myki card is about the same cost as international equivalents? Except the Melbourne card is non-refundable! When you leave Melbourne if you can’t flog the thing to somebody else you have to throw it away. Not in other countries. When I was in Hong Kong recently I paid HK$150 for an Octopus card including HK$100 of travel. When I came to leave I had to load some more money on to cover the fare out to the airport (it’s cheaper if you get a card with airport trips included) and at the airport I got an instant refund for the small amount of unused fares on the card plus the initial HK$50 card cost.

So for visitors to Melbourne Myki is a winner when it comes to bad value and inconvenience. Melbourne’s train system is also ridiculously difficult to navigate, there’s a severe shortage of route mapping around the stations and on platforms. I can navigate the Tokyo subway system – even though I can’t read Japanese – easier than the Melbourne one, where I live!