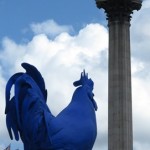 ▲ Every year there’s a new pavilion erected by the Serpentine Gallery in Hyde Park. This year it’s a white climber frame grid with glass or clear plastic panels by Sou Fujimoto. Indeed kids were climbing all over it, although not in this picture. ▲ Then I looke...

At the Olympic Games opening in London (I was there) I commented that some of the crowd participation was remarkably like a mass games in Pyongyang, North Korea, except there were no killer dictators involved and we hadn’t rehearsed. I’ve been to mass games in Pyon...

I’ve been a Boris Bike fan since soon after it launched in London on 30 July 2010. Officially it’s the Barclays Cycle Hire scheme, but we Boris Bikers like to name it after London’s colourful mayor Boris Johnson. I was in London back when the scheme launched and did a...