I’ve been a Boris Bike fan since soon after it launched in London on 30 July 2010. Officially it’s the Barclays Cycle Hire scheme, but we Boris Bikers like to name it after London’s colourful mayor Boris Johnson. I was in London back when the scheme launched and did a lot of Boris Biking in the early days. 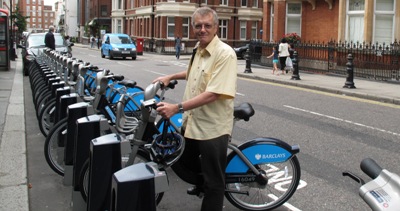 With Boris Biking coming up for its first birthday there have been over 6 million Boris Bike rides and, remarkably, nobody has yet been seriously injured on a Boris Bike. Almost as surprisingly very few of them have been stolen, lots of bike share projects fall apart when the bicycles all disappear, but Boris Bikes seem to be relatively thief proof.

What has been a problem is that Boris Bikes all tend to go the same places – this map shows where most bikes are picked up and dropped off. The big Boris Bike ride is to arrive in London at Waterloo Station in the morning and ride one in to the City. And then repeat the trip in the opposite direction at the other end of the day. So at certain times of the day bikes all disappear from one location and pile up at another. I suffered that the other day when I took a bike from near Trafalgar Square, rode a mile or so to the Regent St side of Soho and simply could not get rid of the damn thing. Every bike station was full up, there was no empty space to dump it. Eventually I did, but I could have walked there in less time.

It also seems your typical Boris Biker is a white male, aged 25 to 44 and with a high income. Sadly Boris Biking is not, yet, for the young and penniless. Or for the old. It’s exactly the same demographic as London cyclists in general somebody pointed out. Never mind, check this story with its 3 minute 45 second video of all the Boris Bikes in London zapping back and forth around the city over one 6 am to 12 midnight period.