At the Olympic Games opening in London (I was there) I commented that some of the crowd participation was remarkably like a mass games in Pyongyang, North Korea, except there were no killer dictators involved and we hadn’t rehearsed.

I’ve been to mass games in Pyongyang twice and both times it was an amazing experience, almost up there with a good Olympic Games opening. And, I’ve said regularly ever since, when they decide wars by whose army dances best my money is on the North Koreans. As a dancing army they’re unbeatable. ▼ 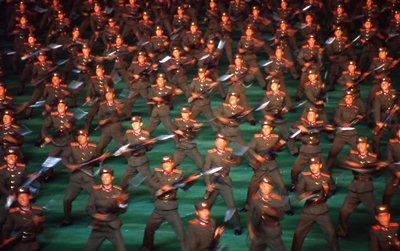 A week after the opening I joined the international band of spectators watching the rainswept women’s marathon on Sunday 5 August – like these British and Japanese spectators just past Trafalgar Square. ▼

I’d watched the front runners pass by along the Embankment and there, in the bottom right corner, you can spot a South Korean flag. ▼ 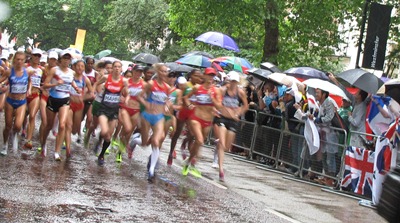 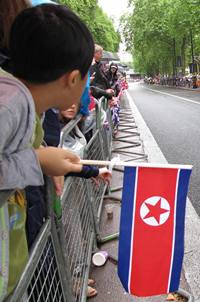 ◄ On the other side of the road, right beside where I was watching, was a band of North Korean supporters, including this young boy waving the North Korean flag. I told their English-speaking leader I’d enjoyed Pyongyang, although I didn’t draw any comparisons between their mass games crowd participation and the London Olympic equivalent.