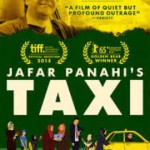 Twitchhiker (Paul Smith) is the second travel book this year which I have really not liked, To Hellholes & Back was the other. The premise: hitchhike from north England to the antipodal position on earth, Campbell Island off to the south of New Zealand. He does...