I don’t have to go far to see the wildlife – feathered variety at least – at this time of year. They come up to my study windows, I can watch them as I type this. 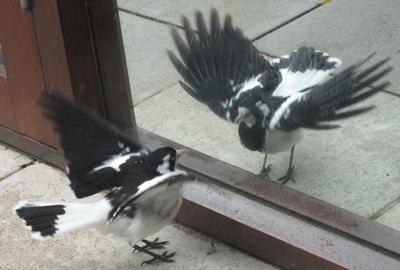 For the past month we’ve had an angry magpie attacking its reflection in windows all around the house, but particularly at this mirrored window just outside my study. Several times a day it stalks up to its reflection, marches by a couple of times, trying very hard to ignore the intruder, but then rearing up and attacking it in feathers out fury. I chase it away, but it will not learn.

Meanwhile out the other study window I can see a blackbird building its nest in our internal courtyard. Yes it looks brown, the male is larger and black, it’s the female which builds the nest and she’s smaller and brown. Last year I had turtle doves nesting in the same courtyard. Blackbirds and turtle doves are both introduced species in Australia. My former Australian home also had an internal courtyard and we had silvereyes, a very attractive native Australian species, nesting there every year for a number of years. 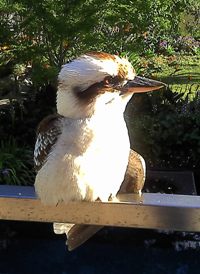 We’ve got other regular feathered visitors around our house on a regular basis including a trio of very noisy kookaburras. They’re totally fearless and are happy to be handfed, as long as it’s prime steak, but the reason they’re hanging around is we have a fish pond in our back yard and kookaburras are, after all, kingfishers. Every evening soon after sunset we have more flying wildlife, Melbourne’s large fruitbat population heads out on its nightly feeding mission, flying south across our place.