On my way north through the Solomon Islands and on to Bougainville in Papua New Guinea I flew in to Balalae or Ballalae Island. I spent a couple of nights at nearby Shortland Island before thumbing a boat ride to Bougainville with islanders heading to Buin for the Saturday market. 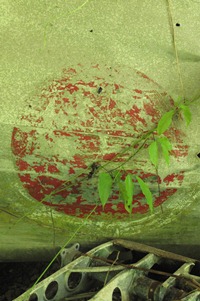 ◄ The Rising Sun still visible on this aircraft wreckage

It’s only a short boat ride from Shortland to Balalae so during my stop I went back there to look for the Japanese wreckage scattered off the runway. There’s an open shed by the lagoon side with a collection of aircraft bits and pieces including the fuselage of a Betty bomber.

Just off the runway on the western side there’s this surprisingly complete Betty bomber.  ▼ 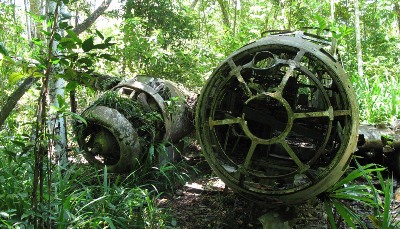 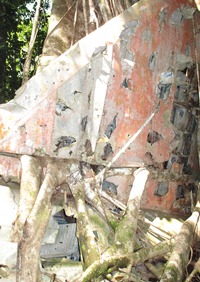 ◄ While off the eastern side of the runway there’s more Betty wreckage including this aircraft with a tree forcing its way through the tailplane vertical stabilizer, remarkably like that Angkor Wat temple in Cambodia, with vines encircling the stones and pulling them apart.

In October 1942 600 British prisoners of war in Singapore, with their commander Lieutenant Colonel John Bassett, were loaded on to a ship which they were told would transport them to a prison camp in Japan.

Instead they headed south of the equator, stopping in Surabaya in Indonesia and continuing to Rabaul on the island of New Britain in Papua New Guinea. In November the 517 fittest men were shipped out of Rabaul and taken to Balalae where they arrived in late November and were set to work to build the runway still in use today.

Many of the prisoners died from overwork, exhaustion and tropical diseases, but a great number were killed by allied air raids on the island. A B24 raid on the night of 12-13 March 1943 may have killed as many as 300 of the prisoners of war when three bombs landed on their encampment. In late June 1945 another heavy air raid followed by shelling from US navy ships convinced the Japanese that the island was about to be invaded and they decided to execute all the surviving prisoners. On 30 June 1943 the survivors, perhaps 70 to 100 men, were all bayoneted or beheaded.

After the war ended a mass grave was discovered by Australian investigators and the remains of over 400 men were removed in November-December 1945 and are now buried at the Bomana Commonwealth War Cemetery in Port Moresby. Over 100 Japanese servicemen on the island who were interviewed about events on the island denied any knowledge of the executions. For many years British Ministry of Defence records insisted that the 517 men shipped out of Rabaul had died when their ship was sunk. In fact Chinese prisoners and two Koreans working on the island had reported the massacre and in 1946 Norihiko Ozaki, one of the island commanders, made a confession. No war crime convictions for the events on Balalae were ever made. 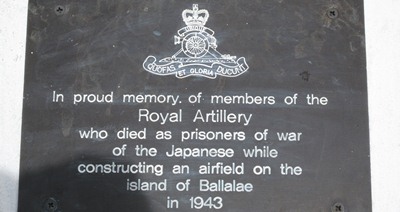 Of the 80 odd less healthy men left behind in Rabaul the only survivors were 18 men who had been transferred to the small island of Watom, just off the coast to the north of Rabaul. None of the prisoners in Rabaul itself survived. The British COFEPOW (Children of Far East Prisoners of War) website has interesting – but heartbreaking – reports on the search for the story of Balalae and a pilgrimage to the island to erect the small memorial. Admiral Yamamoto, who planned the attack on Pearl Harbor, was flying to Balalae when he was shot down near Buin, I visited the site of his crashed aircraft.