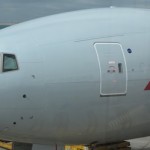 New Paint? Just flown to New York with American Airlines, who are currently making a song and dance about new aircraft, new style – all the advantages of going bankrupt. They do have a new colour scheme, since Day 1 American Airlines aircraft have not been painted – ...

I crossed the Atlantic on the Cunard ship Queen Mary 2 in May this year and I commented that it was one of those ‘been there, done that’ experience, I wouldn’t be in any hurry to make another Cunard trip. I’d be much less enthusiastic about cruising with the Ca...