A quick trip London-Boston-London to speak at the new state-of-the art Boston Hostelling International place, 480 beds, many of them in private rooms, lots of communal space and facilities and neatly squeezed between Chinatown and the Theater District and a stone’s throw from Boston Common.

So who do I fly with – business class? I could have saved money by not going direct – a stop in Iceland with Loftleidair or in Ireland with Aer Lingus. Or by flying both ways with a US airline. I don’t want to stop and I prefer to avoid US airlines. I end up with a 50:50 deal, booking through American Airlines, but flying British Airways westbound, American Airlines eastbound. The experience:

Despite paying all that money for a business class seat BA still tries to charge an amazing £65 to choose my seat! I check in online as soon as the 24 hour pre-departure window opens and discover I’ve already been assigned the window seat I wanted anyway. AA seat assignment is free. Despite having a boarding pass for some reason I’m sent back for a passport check at London Heathrow security and in the other direction my boarding pass won’t print out at all.

At the Airport
Hands down win to Heathrow on departure. Zip through security and the BA lounge in London is streets ahead of the AA lounge in Boston. Not only does AA charge you for food and drink (free with BA) it’s also interminably slow. How long can it take to make a café latte? Hardly surprisingly it’s US airport security which is the big thumbs down. Boston was where the Twin Towers 9/11 killers got through security so why, a decade later, is it still a shambolic mess? Whenever I encounter a hopeless security design I always think ‘I could design this better’ and Boston is certainly a good example of how not to do it. Has nobody ever gone to another airport and noticed how much better it works if you have more than a couple of trays lead in to the X-ray machine? And a similar pile up on the exit side? No, they clearly haven’t from Boston, getting through their hopeless security takes almost half an hour. 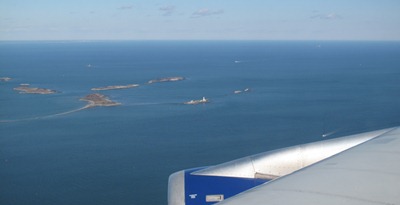 In the Air – BA Westbound
I fly daytime in both directions, I hate those overnight Atlantic crossings from the US. The BA aircraft (G-CIVR) is a 15 year old 747 with BA’s patented alternating backward-forward business class seats. Cabin crew on new A380 super jumbos reckon the entertainment system is one of the biggest steps forward from the 747. Sure enough the entertainment system crashes and has to be rebooted although my usual 747 complaint – laptop power falling over – doesn’t happen.

What does happen is half way across I realise, from the flight path moving map, that we’re heading to New York, not Boston. I pull out my GPS, hold it up to the window and confirm that yes indeed, that is where we’re going. ‘No we’re not,’ I’m told when I ask a flight attendant. Late in the flight the captain comes on to suggest we don’t believe the flight path story and we’ll arrive sooner than it says since Boston is 310km closer to London. 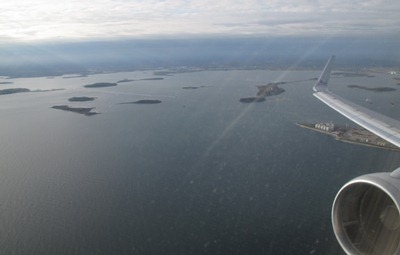 ▲ AA out of Boston

In the Air – AA Eastbound
Unlike my previous ‘flying Detroit’ experience with American Airlines we leave right on time and would have arrived right on time if Heathrow hadn’t put us into a holding pattern for 20+ minutes. Then they can’t seem to open the door once we’re at the gate. The 757 (N178AA) is a much more comfortable version that the Dominican Republic one as well although I’m a little surprised to find it’s only 10 years old (production ended in 2004) although curiously the toilet I used was not vacuum flush, which would have made it a much older 757?

Yesterday I wrote about the first trans-Atlantic flight, back in 1919. It took off from St Johns in Newfoundland and we passed very close overhead St Johns on my eastbound flight. Westbound we flew down the western side of Newfoundland, close to where I went on a Newfoundland visit four years ago.