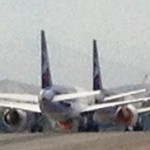 I’ve still not flown on a Boeing 787 Deamliner – but then A380s had been in service for nearly two years before I made my first flight on the double decker Airbus. I’ve flown them on a number of occasions since, but my first flight wasn’t too successful. Due to a tech...

▲ A Qantas 747 taking off (seen from British Airway's Heathrow Terminal 5) Google ‘Qantas’, ‘engine failure’ and ’Singapore’ and you’ll follow a sorry tale. On 4 November a Qantas A380 (double decker Airbus) suffered an ‘uncontained’ engine failure as it climbed ...