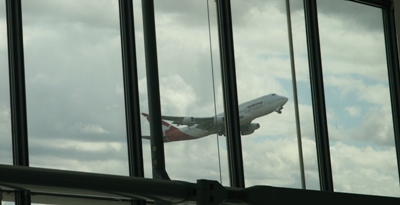 Google ‘Qantas’, ‘engine failure’ and ’Singapore’ and you’ll follow a sorry tale. On 4 November a Qantas A380 (double decker Airbus) suffered an ‘uncontained’ engine failure as it climbed away from Singapore’s Changi Airport. Uncontained means loose bits of engine penetrated the engine housing, some of them hit the aircraft’s wing before showering down on the Indonesian island of Batam below. Nobody was injured on the plane or in Indonesia.

Barely 24 hours later another Qantas aircraft, this time a 747, also had to shut down an engine  soon after takeoff from Singapore, dump fuel and return. The passengers included the unfortunate captain of the A380 on his way back to Australia.

Well I’ve had a Qantas engine failure out of Singapore as well. Mine was in a 747 and was nowhere near as dramatic. After dumping fuel – ‘if you’re sitting behind the wing you can watch $30,000 of fuel disappear,’ the captain announced – we returned to Singapore and a few hours later continued on to London. 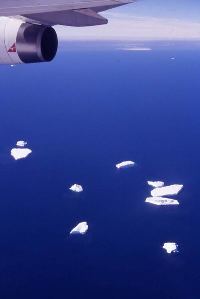 This was in pre-9/11 days when you could get up to the flight deck if you asked politely. I did and asked the crew what had happened. It was a bit like the aviation equivalent of a broken throttle cable on a car they explained, the engine was running at idle, they couldn’t control it. How did they know it was out of action I asked? Not by ‘an engine has failed ‘ warning light it turned out, the first sign the crew had that something was wrong was when the aircraft started to veer to one side, with two engines on one wing and only one on the other.

◄ A Qantas 747 over Antarctica

Fishermen down below don’t get a kerosene bath either, the fuel vaporises as it’s dumped. And I have visited Batam, it’s the island directly south of Singapore, part of the Indonesian Riau Archipelago and a quick ferry ride from the city state.