‘Come to China for the launch of the new Mini Countryman model,’  suggested BMW China. Selling cars to China sounds a bit like that old ‘coals to Newcastle’ (or ‘ice cream to Eskimos’) line, but either trade with China has to be two way or we’re going to be up to our necks in debt. I don’t see any sign of people in the West cutting back on their clothes or iPod purchases so if BMW can sell Minis there I’m all for it. 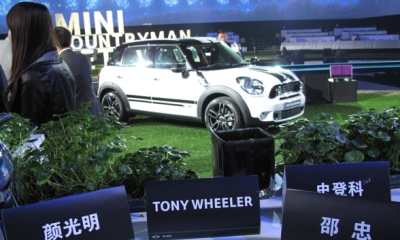 BMW’s idea was to link the new Mini with travel and since National Geographic and Lonely Planet are big names in travel in China they invited Nat Geo photographer Michael Yamashita and me along for the launch. They were even more enthusiastic when I pointed out that the original drive from London in England to Kabul in Afghanistan which led to the very first Lonely Planet guidebook was made in a Mini.

▲ Maureen drives a Mini in Australia so that’s a new Mini, the middle shot is our 1972 Mini with Mt Ararat in eastern Turkey in the background while on the right we were in the Swiss Alps.

▲  My Mini China experience kicked off at Xiamen Airport (look north along the coast from Hong Kong) where I was handed the keys to a black Mini Cooper S convertible, so I had my own wheels while I was there! It was a reminder of my favourite travel book of the last 12 months, Country Driving about getting behind the wheel in China. 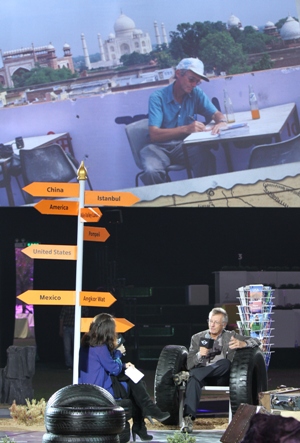 ◄ During the launch I talked travel with Chinese interviewer Chen Xiao-Nan while travel shots were projected all around the centre, like this one of me taking notes in a rooftop café in Agra, India with the Taj Mahal in the background.

The launch featured lots of travel images and also some Mini history, like these 1960s English promo shots of a Mini Moke and a Minivan. ▼

At the dinner after the launch there were interesting snatches of conversation about the car business in China today:

• Talking to Harbin’s Ferrari dealer – ‘how many Ferraris do you sell in Harbin?’ ‘Oh not many, less than 100 a year.’
• BMW own Rolls-Royce as well as Mini – ‘so what’s the market like for Rolls-Royce in China?’ ‘680 last year, but the funny thing is you never see them on the road. I don’t think their owners actually drive them, they just keep them in their garage and then after dinner they can say “come and look at what I’ve just bought” to their dinner guests.’