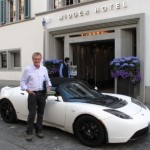 The Alps in a Tesla

There’s a new expression in our travel vocabulary: ‘range anxiety.’ You suffer range anxiety when you’re driving somewhere in an electric car and you worry that you may not get there before the battery runs flat. Electric cars are still in their early days but when...

I love the ‘view out the window’  and take lots of photographs when I fly places but we don’t often get a good aerial look at the airport. Flying in to San Jose, Costa Rica the flight in front of us was a bit slow getting off the runway and our pilot had to abandon th...