Kangaroo Island for the New Year 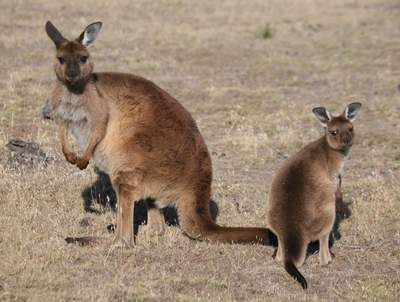 We finished 2008 and started 2009 with a visit to Kangaroo Island. Australia’s third largest island (after the mainland that is) lies south of Adelaide in the state of South Australia. It’s big (seven times as large as Singapore Island) and lightly populated (there are 1000 times as many Singaporeans as Kangaroo Islanders). So with 4500 or so people across 4500 square km it’s a long way from crowded.

What it does have is lots of wildlife, some wild scenery and a very stylish (if wildly expensive) new place to stay. 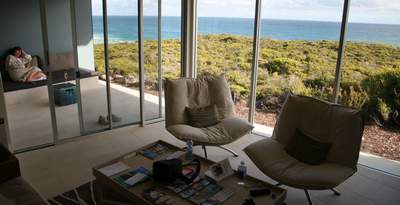 ▲ Looking out from the Southern Ocean Lodge

.
The wildlife makes up for it, we saw plenty of kangaroos (fortunately we didn’t run in to any of them, a lot of cars do), seals (sea-lions and fur seals), koalas, goannas, echidnas, dolphins, we even managed to spot the rare glossy black cockatoo.

▲ Southern Ocean Lodge – outside looking in

But mainly we lazed, staying at the stylish new Southern Ocean Lodge, a long architectural sliver drifting smoothly down a hillside overlooking Hanson Bay on the island’s rugged south coast.