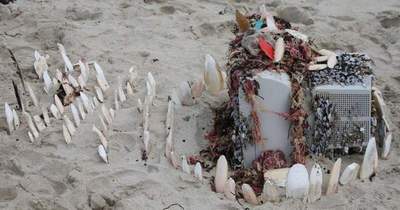 New Year’s Eve, Hanson Bay on Kangaroo Island, South Australia. Walking along the beach I come across a computer monitor washed ashore. It’s been in the sea long enough to get encrusted in shells and weed, but remarkably the screen has not broken. A kid has turned it into a drive in movie with cuttleshells lined up in front of the screen. A little further along the beach is a second monitor, different make and it’s not been in the water so long.