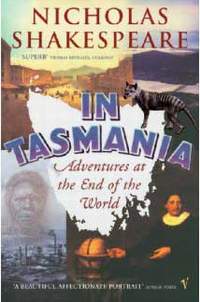 The last two years I’ve kicked off the year with a walk in the Australian island state of Tasmania. In January 2008 I was walking on Maria Island. On 1 January 2007 I was part way down the Overland Track, the most popular long distance walk not only in Tasmania but in all of Australia. I didn’t make it three Tasmanian Januaries in a row, I started this year on South Australia’s Kangaroo Island.

But I did start the year by reading Nicholas Shakespeare’s In Tasmania, accurately subtitled ‘Adventures at the End of the World.’ Best known for his biography of Bruce Chatwin and for his novel (later a John Malkovich movie) The Dancer Upstairs, Shakespeare discovered he had a Tasmanian family connections, moved there and wrote this combination of history and family history wound around the often thoroughly disreputable (but also extremely colourful) Anthony Fenn Kemp.