Another grey day. Since I’ve arrived in China I’ve rarely seen blue sky. Is it the fearsome pollution New China is famous for? Or have I just hit a stretch of bad weather? Today it’s actually raining, but usually it’s simply grey, overcast without ever getting beyond a drizzle. 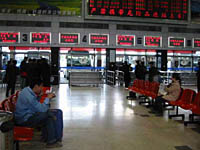 The two-year-old (and about to be superseded) China guide shows a freeway under construction along the coast from Fuzhou to Wenzhou to Ningbo and a bus travel time totalling 16 hours. Reality: freeway all the way. The first stretch drops from 10 hours to 4½, the second from six hours to 3½. Wenzhou really is just a transit stop; all I do is take a taxi from the south bus station to the west and grab a bowl of noodles. 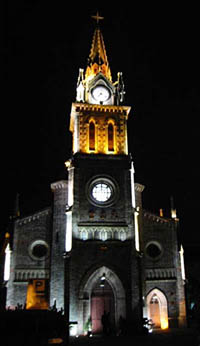 I arrive in Ningbo with plenty of time to look around and it’s a town I take an instant liking to. The Ningbo Hotel is walking distance from the bus station and has easily the most stylish room I’ve seen in China. Then there’s a pleasant stroll by the canal, through a park, along a pedestrianised shopping street and along the riverside. Dinner is probably the best meal I’ve had in China this trip (which is not saying a lot, it’s been miss more than hit), followed by a beer at LBB, which ‘Hank’ tells me is the main foreigners’ hangout in town – in between explaining that most things in China are cheap, but girlfriends and wives are definitely not, and can I give him any advice on whether he should marry his girlfriend?

Ningbo also has a brand new riverside enclave of fancy restaurants, bars and cafes (even a Starbucks). Audis, BMWs, Mercedes and Lexuses are heavily featured in the car parking here, but the main shopping street looks equally affluent. So it’s somewhat surprising that Ningbo also has more beggars than I’ve seen in any other town in China.

When I started in Singapore I was over 3500km from Shanghai. As the crow flies (or the GPS indicates) I’m only 137km away from the iconic city of the 21st century’s first decade. Except I’m planning to take a more interesting route over the next couple of days.