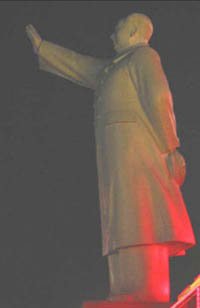 A big statue of Mao overlooks the main square in the centre of Fuzhou. There aren’t many left – or perhaps there weren’t actually that many to start with. In Eastern Europe, Lenin, Stalin and Marx were quietly taken down and hustled away, in Iraq Saddam was violently pulled down, but in China the Chairman just faded away. In Fuzhou he’s still striding out on to Wuyi Square, arm raised in salute, but he’s striding out into the New China, flanked by brightly lit billboards. In fact HOB beer to his right and Unicom China mobile phones to his left are much better illuminated than Mao. Compared to other statuary around the square he’s in shadows, quietly forgotten about.

Fuzhou, another transit town in my travels, is easily the biggest, busiest and most congested city I’ve been through. With a population figure of over seven million it clearly should be big, but nowhere in China seems to have less than a million people. 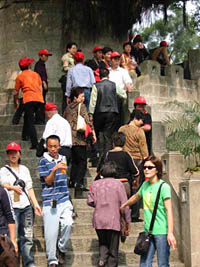 I’d started the day with a walk around Gulang Yu, admiring some of the imposing buildings wealthy Chinese put up in the first half of the 20th century and climbing up to Sunrise Rock, the highest point on the island and overrun by tour groups. Back on the mainland I’d visited another temple, taken a bus to Quanzhou and taken a motorcycle taxi for yet another temple tour. This one, the expansive Kaiyuan Si, has the hull of a recently excavated Song dynasty junk displayed in an adjacent building. Then it was more freeway to zip me to Fuzhou.