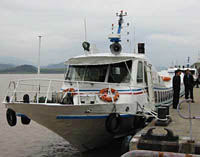 Rather overrated, off the coast of Zhejiang and about 150km from Shanghai in a straight line, this island is supposed to offer a glimpse of Old China with colourful temples, arched bridges and fishing boats. In fact it offers a glimpse of New China tourism with multiple flag-led groups of local package tourists trooping on and off minibuses and marching from one temple to another.

It is strictly a local attraction. I see a couple of other Western visitors as I leave the dock area but that’s it for the whole day. 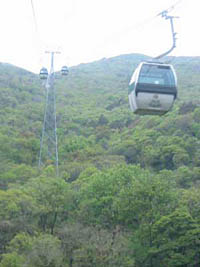 I spend most of the day walking to various sites with the intention of ending up at the far end of the island, riding the cable car up to the hilltop temple at the island’s highest point and then walking back downhill to my hotel. A few hundred metres from the gondola station I glance at my watch, realise it’s 4.55 pm and have a horrible thought that perhaps it closes at 5pm. It does and I’m the last, panting, passenger for the day.

I’ve had less than total success with restaurants since I arrived in China. Menus in English are virtually non-existent off the beaten tourist track (most of the time I have been well off the standard track) and even the point and ‘I’ll have the same’ routine has been hit and miss.

Tonight there’s no arguing: I point out a fish swimming around a plastic bowl, it’s scooped out with a net … and hustled off to the kitchen to die, right?

No way. Dinner is hurled down on the floor. Thwack!