I’m in Alaska travelling with an LPTV film crew making a program for the forthcoming Roads Less Travelled series with National Geographic. After starting out in Anchorage I’ve been by train to Whittier, crossed Prince William Sound and taken the McCarthy Road up to the old ghost town of McCarthy. From there I ventured out on to the Root Glacier to try ice climbing (and ice biking, that’s another story) and camped out on the glacial ice. 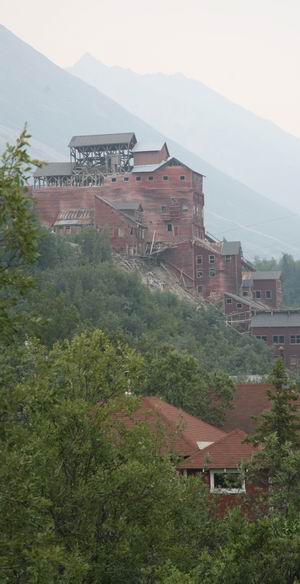 There’s some spelling confusion here because the glacier and the river is the Kennicott, but the Kennecott mining company managed to misspell the name, so their town is Kennecott. The gigantic timber mine building still stands, towering over the town and a visible landmark from way up on the glacier.

The mine closed down in 1938 and one story insists that the door was slammed shut in a real hurry, the mineworkers were told it was all over and they had two hours to grab their belongings, shut up shop and grab the last train out. In fact the final three mines were closed in September, but the last train out didn’t depart until November. 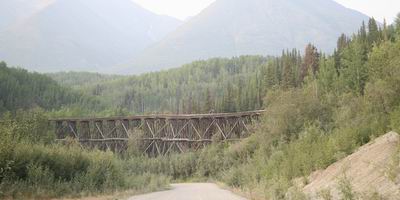 The disused wooden Gilahina Trestle beside the McCarthy Road

The McCarthy Road follows the course of the old railway up to Kennecott, it opened in 1911 and closed with the mine in 1938. In 1974 it was finally converted into a road, but it was clearly quite a construction. The Gilahina Trestle, a wonky wooden construction beside the road at Gilahina River is one of the finest pieces of crumbling railway infrastructure. 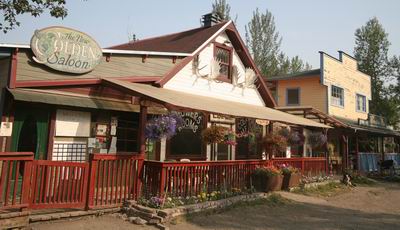 The Golden Saloon bar in the main street of McCarthy 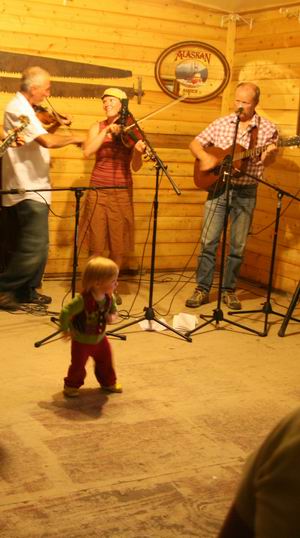 Five miles downhill from Kennecott is McCarthy, the bar and brothel for Kennecott, which was a strait-laced company town. Like Kennecott it became a ghost town after the mine closure, but today it’s also bouncing back. Neil Darish is the town’s live wire, he’s rebuilt Ma Johnson’s Hotel and runs a host of other McCarthy enterprises including the Golden Saloon where local bluegrass band Whistle Pig is performing on our last night in town. It feels like half the town is up dancing including a year-and-a-half old girl who hits the floor and jigs around like there’s no tomorrow.

Now it’s back to Anchorage and on to Nome