I’m in Alaska travelling with an LPTV film crew making a program for the forthcoming Roads Less Travelled series with National Geographic. I’ve been east of Anchorage across Prince William Sound to McCarthy-Kennecott and the Wrangell-St Elias National Park, now I’m heading north to Nome.

Way north, my flight goes via Kotzebue, just north of the Arctic Circle and Nome is not far south. This time of year it barely gets dark. At the end of my stay in Nome I’ve come to a firm conclusion: Nome residents (the male ones at least) may all have beards, but none of them are more than 12 years old. This is a town for racing around on ATVs (four-wheelers), performing crazy stunts on ski-doos (if you go fast enough you can effectively water ski on them) or just get out for those three essential Alaskan pursuits: huntin’, fishin’, shootin’.

I have a great time in Nome. Some highlights: 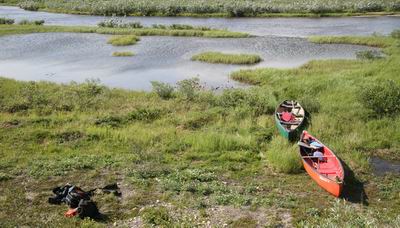 Canoes beside the Pilgrim River 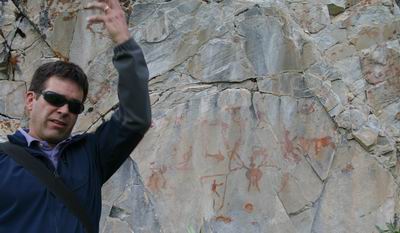 A helicopter trip up to the remote Qugsuqtik rock painting. The Inupiaq name translates as ‘the white one,’ because the white hill stands out from the surrounding green tundra. It’s one of only two rock painting sites of this type in Alaska (North America?) although there are other similar rock paintings in Siberia. The Inupiat people of Siberia and Alaska are closely related and speak the same language, the border is an artificial one. 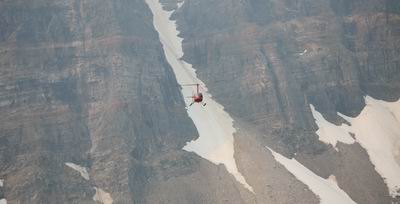 Helicopter coming in to land at the Koongmute Pass

Another helicopter trip, this one up to the Koongmute Pass, just below Mt Osborn, the highest mountain on the Seward Peninsula. Right at the pass is a rock cairn with a huge phallic stone placed there by the legendary Kawgramute leader Toothlik to commemorate killing a bear with his bare hands just below the pass. If this was India it would be a Shiva lingam. 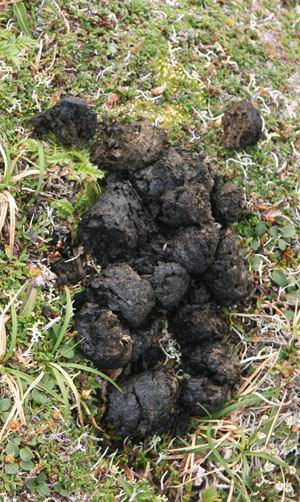 Just below the pass ridge I come across scat which even for an Alaskan amateur like me says: ‘bear’. OK B-E-A-R! Matt Ganley, our expert Nome guide, immediately identifies it as brown bear and an expert finger in the shit concludes that it’s warm, ie the bear can’t be far away. We fly out without seeing it. 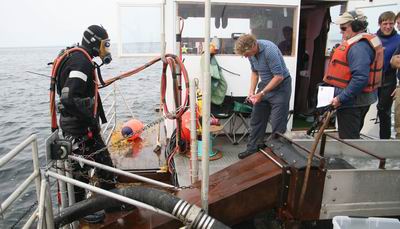 Ocean miner about to descend to search for gold 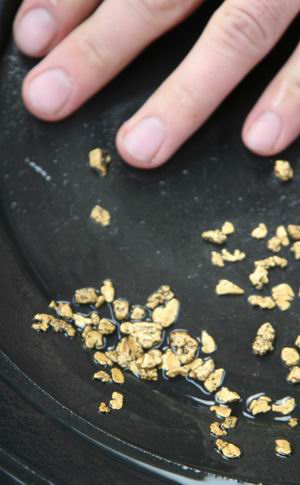 A trip offshore to a group of young ‘ocean miners’ dredging up the sand from five metres below sea level. Nome’s original gold rush took place right on the beach and they’re still finding gold a few hundred metres
offshore. It’s a mildly updated version of the old gold panning routine and, much to my surprise, what you find doesn’t need any processing, it’s clearly recognisable as nice little chips of gold. They vacuum up that gold rich sand in eight hour shifts all through the summer, when the water temperature is around 50ºF (10ºC), but if necessary they’ll dive beneath the ice in winter.

Our Nome coffee, food and beer favourite is Airport Pizza. It may not be at the airport, but their slogan is ‘You Buy, We Fly.’ Yes, they offer free pizza delivery to remote Seward Peninsula villages. Phone up and they’ll pop a pizza on the next bush flight.

It’s just after midnight and we’ve driven up to the top of Mt Anvil, overlooking Nome, to wander around the remains of one of the White Alice stations. This weird piece of Cold War telecommunications engineering looks like a bizarre space-age version of Stonehenge from down in Nome. Close up it’s more like a Victorian-era film set for a shoot of War of the Worlds. Weird, like everything else in Nome.