I’m in Alaska travelling with an LPTV film crew making a program for the forthcoming Roads Less Travelled series with National Geographic. I’ve travelled up to the ghost town of McCarthy from where it’s out on to the Root Glacier.

This immense glacier heads straight down past the town of Kennecott and on towards McCarthy. Having met up with Monty and Paul, mountain guides from Kennicott Wilderness Guides it’s out on to the glacier with the LPTV film crew. We’re a small band, just Peter Zackoff the cameraman and Sean Cousins, the director who also handles sound. 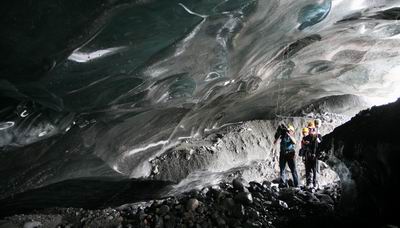 Inside an ice cave with the LPTV film crew

Our two days on the glacier include a visit to an ice cave and a night spent camping on the ice. 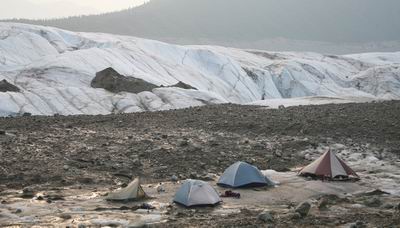 Camping on the ice of the Root Glacier 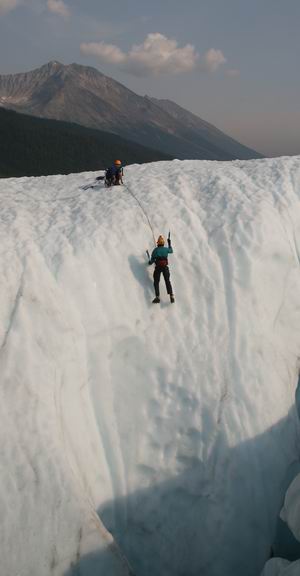 I spent some time learning the ropes (crampons and ice axes) involved in ice climbing. I’ve had zero prior experience of this activity and I’m sure when the program’s finished I’m going to look a lot less than elegant, but I do manage to get myself up the ice walls and also out of a moulin. A moulin is a hole or chute leading down into a glacier,
it’s been ‘milled’ out by the water spiralling down the hole and the word, like a lot of glacial terminology, is French. Of course we all know about the Moulin Rouge (Red Mill) in Paris, well these glacial moulins are usually blue. I got myself a little further down into a moulin than I’d planned (well it looked really interesting down there) so getting out, given my amateur ice climbing skills, took more effort than I would have wished.

Monty climbing out of a moulin