I stayed at the interesting Old Clare Hotel in the Sydney central suburb of Chippendale during the recent Sydney Writers Festival. That’s easy walking distance from Central Station, the main Sydney railway station and connected directly to Sydney Airport. 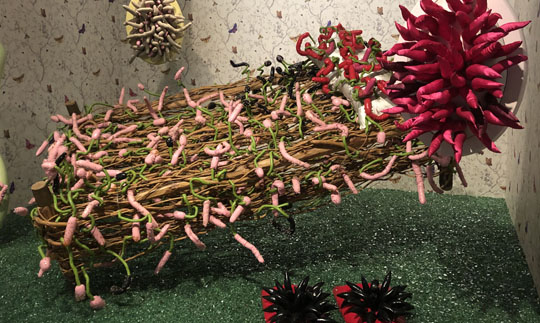 ▲ A short walk from the hotel is the White Rabbit Gallery at 30 Balfour St, very flash and focusing on very unusual contemporary Chinese art. Weird even. The current exhibit Hot Blood runs until 4 August and features Patty Chang who urinated her way across China following the South-North Water Diversion Project, pausing for a pee at every important junction in the channel – that’s on video – plus the assorted plastic water bottles she fashioned into interesting stand-up urine containers. There’s a whole floor on Chen Zhe who recorded her regular self-harm episodes – cutting, burning, bruising – and, fortunately, eventually decided it was not a good idea. Then there are cigarette ends from Yin Xiuzhen, used ones, unlike the cigarette art I saw at the Yuz Museum in Shanghai five years ago. Or Mia Liu’s Möbius Strip of little paper hands. Not to mention Lu Yang’s Electromagnetic Brainology video game enclosure as you first enter. 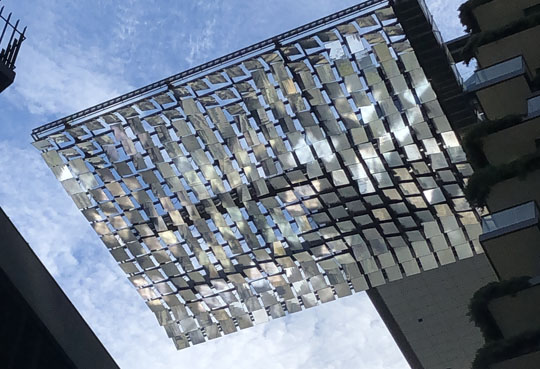 ▲ Between the gallery and my hotel there’s also some very interesting artistic architecture including the One Central Park vertical garden and the building’s weird cantilevered heliostat. So what is a heliostat? According to Wikipedia ‘A heliostat (from helios, the Greek word for sun, and stat, as in stationary) is a device that includes a mirror, usually a plane mirror, which turns so as to keep reflecting sunlight toward a predetermined target, compensating for the sun’s apparent motions in the sky.’

Right and what does it do? Well One Central Park’s heliostat’s 320 mirrored panels move to direct light into what would otherwise be dimly lit areas between the buildings in the complex. Then at night LED lights turn it into an art project. Cool.