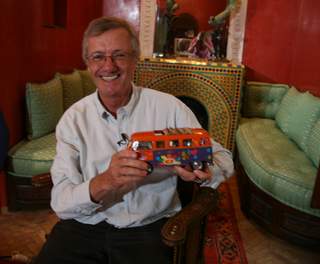 The Hippie Trail
When Maureen and I stopped in Marrakech on our little England to Africa drive in February 2007 I spent some time with German film-maker Maren Niemeyer. There will be a documentary on German and French television later this year on the ‘hippie trail’ and I talked about our time along the trail in 1972 and my return visit to Afghanistan last year. During the interview Maren surprised me by pulling this ‘flower power’ Volkswagen Kombi out of her bag!