The Cats of London – another bicycle ride


Having pedalled my bicycle around the London Monopoly board I set out on another Sunday ride with The Fridays cycling group to check out the cats of London. A ‘Purrfect’ ride as they described it. Home to home (including the 10km to Russell Square at the start and back again afterwards) it totalled 50km for me. 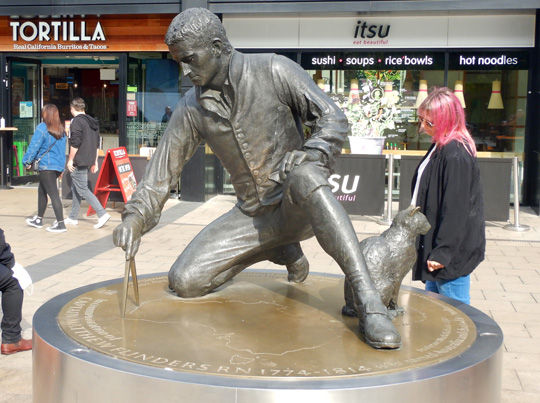 ▲ We started with the good cat Trim and explorer Matthew Flinders at Euston Station. I posted a blog about him when he (and Trim) were inside the station, now they’re outside and look much better for it. Plus his grave had been discovered in 2019. The cemetery where he was buried disappeared under the train station in 1849 and given that there were 40,000 remains buried there it seemed unlikely that his would turn up. Remarkably in the HS2 high speed train developments the Flinders grave was discovered almost immediately and this story in The Guardian covers this surprising story. It may not have been a big deal in the UK, but certainly was in Australia where Matthew Flinders has more statues than anybody else except for Queen Victoria! 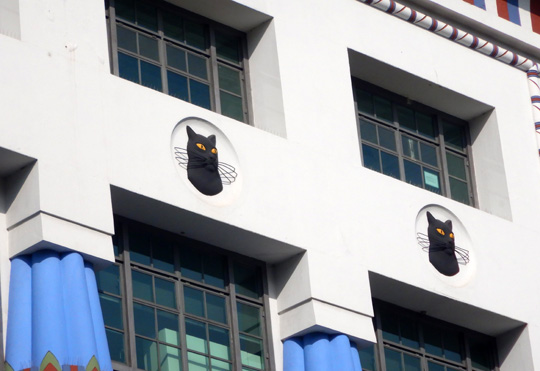 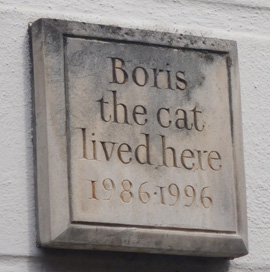 ▲ From there we continued to Camden (where I lived for a spell in the 1990s) and Greater London House, a wonderful Egyptian Revival art deco building, formerly a tobacco company’s head office. Two big cat statues flank the entrance and there are lots of cat heads along the top of the building.

◄ On through Camden and past Camden Lock to Kentish Town where there’s a white plaque noting that ‘Boris the Cat lived here 1986 to 1996.’ 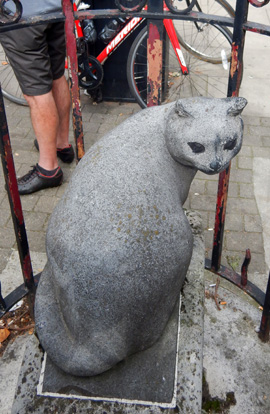 ◄ We pass a number of reminders of Dick Whittington and his cat Tommy, although the cat may never have existed and if it did its name may not have been Tommy. This statue on Highgate Hill is on a memorial that dates from 1821 although the cat statue is a 1964 addition. It’s quite a complicated story which you can read in this London Remembers posting. Supposedly this was where he heard the Bow Bells ring out ‘Turn again, Dick Whittington, thrice Lord Mayor of London’. 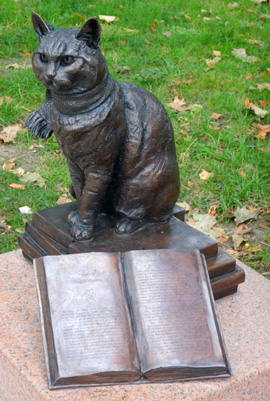 ◄ Near the Almeida Theatre in Islington there’s a very nice statue to Bob, the cat of A Street Cat Named Bob, a very popular (ie something of a tear jerker) book and movie. And a follow up. Bob’s busker and heroin addict owner (Bob saved him) worked his pitch near the Angel tube station.

From Bob we visited Sam, the cat of Patricia Penn in Queen Square WC1, then Kasper the ‘guest 14’ cat at the Savoy Hotel before a long trek to Bermondsey and assorted Salter family statues, including their cat, beside the river. Right across the road from the statue collection is the site of King Edward III’s Manor House. 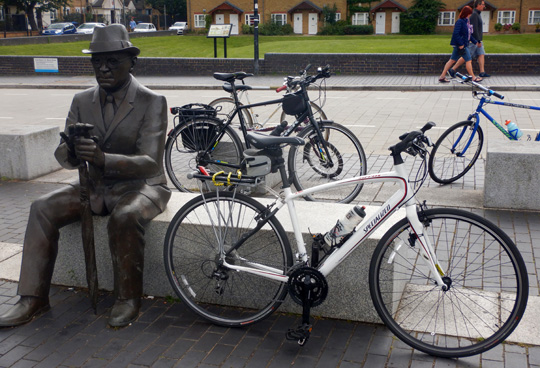 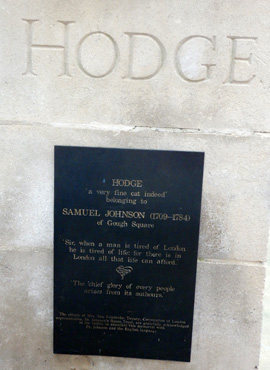 ▲ Statue of local hero Alfred Salter (1873-1945) and my bicycle. His cat is a few steps away on a wall overlooking the Thames River.

◄ Finally we U-turn and head back towards our starting point for Hodge, Samuel Johnson’s cat, outside his house in Gough Square. It’s a nice juxtaposition with Trim at the very beginning of our ride. The statue of Hodge is surveying an oyster, a favourite cat-snack and it’s said Johnson was so fond of his cat that he always shopped for his oyster rations himself, not leaving it to a servant to procure.