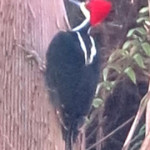 The Panama Canal is a huge part of the Cuban economy and will become even more important when the expanded locks open next month and even larger New Panamax vessels can take that handy shortcut between the Atlantic and Pacific, paying up to US$376,000 for the trip. Th... 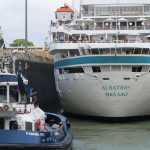 My principal reason for visiting Panama was, of course, to see the Panama Canal. A quick history: A French team led by Ferdinand de Lesseps constructed the Suez Canal linking the Mediterranean with the Red Sea. Originally 164 km in length it took 10 years to construct...

My Panama City visit featured the new skyscrapered financial centre and the original Spanish city Panamá Viejo, until it was sacked by the English pirate Henry Morgan. But I started my Panama visit by staying in Casco Viejo, the newer ‘old city’ which replaced the ori... 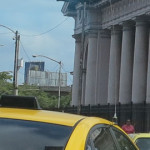 ◄ We followed this taxi flying a pirate flag from an aerial. ‘Ah, il pirata,’ my driver commented. And then, somewhat ruefully: ‘Morgan.’ You can’t get away from Sir Henry Morgan, the English pirate who comprehensively sacked Panama back in 1671. Nearly 350 years l... 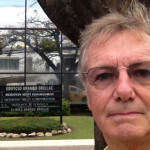 After my visit to Cuba – last gasp centre of fast-fading Communism – I travelled to Panama just as it became the worldwide symbol of greedy grasping Capitalism. Yes, the Panama Papers story broke just a day before I arrived in Panama City. So I looked up where ground ...