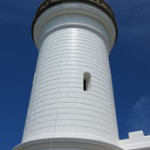 ◄ The Byron Bay lighthouse marks the most easterly point of Australia. With a group of friends I head off somewhere in Australia for a week in January or February each year. This year Byron Bay was the destination, the LP Australia guide suggests it’s the place where ...

Have I maligned poor Nimbin? It’s an Australian counter-cultural capital in the north of New South Wales and when I put together a ‘worst in travel’ list for Doug Lansky’s Titanic Awards I accused Nimbin of having turned out the worst pizza I’d ever tried (and failed)...