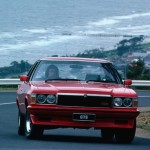 ▲ Me in 1977, driving a Holden GTS up the winding road to Arthurs Seat along the coast from Melbourne. (photographer Adrian van Valen) It was the iconic Australian car. The first FJ Holden rolled off the assembly line in 1948, but in four years times (so just a y...

What’s the most commonly stolen car? Usually older cars (easier to steal) and popular cars (more of them to steal). So in the US Hondas and Toyotas get stolen most often, in the UK it’s an assortment of Fords and Vauxhalls, in Australia Holdens and Fords. But a recent...