What’s the most commonly stolen car? Usually older cars (easier to steal) and popular cars (more of them to steal). So in the US Hondas and Toyotas get stolen most often, in the UK it’s an assortment of Fords and Vauxhalls, in Australia Holdens and Fords. But a recent US report revealed what new cars get stolen most frequently on a percentage basis and the answer is car thieves like flash and bling. US car makers may go bankrupt because not enough Americans buy their cars, but thieves certainly like them, eight out of the 10 ‘most stolen’ cars were American. 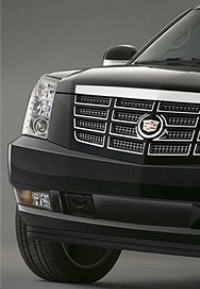 ◄  Topping the list was the car I’ve already nominated as the ugliest thing on four wheels, the original axle-of-evil, the Cadillac Escalade. Own an Escalade and you’re three to five times more likely to find an empty space where your wheels should be, or 13 times more likely than if you’d bought a Volvo S80 (the least frequently stolen car in the USA). The Hummer, the original ugly-mobile, is also right up there in the steal-this-car stakes.

Meanwhile in the UK the bad taste car story is Middle Eastern super cars in the fashionable Knightsbridge district – home to the Harrods department store. Wealthy young Arab men have their Lamborghinis flown to London for the summer at a cost of around £10,000 (US$15,500). The handling agent which bring them in reckons they’ve flown 15 cars to London for the summer of 2010. And not ordinary super cars, the Abu Dhabi bling-mobile dealer says the average one million dirham (US$270,000) super car buyer spends another half a million dirham (US$135,000) tricking it up.

The end result can be something like this Mercedes SLR and Bugatti Veyron I noted in Mayfair, looking like they’d been entirely chromeplated and proving you can spend an awful lot of money to end up with what the Brits would call a ‘chav-mobile,’ in Australia the owner would be a bogan.