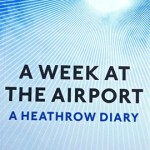 A Week at the Airport – A Heathrow Diary

In between philosophising about everything from work, religion, sex and art to philosophy Alain de Botton also hung out at British Airway’s Terminal 5 for a week to watch what goes on. He was accompanied by photographer Richard Baker. It’s subtitled A Heathrow Diary. ...

Sometimes flights offer fantastic views from start to finish, like QF 127 on Monday 28 February 2011, a Qantas 747 heading from Hong Kong to London. First of all we took off heading west and then circled round east to fly directly over Victoria Harbour, the rapidly na...