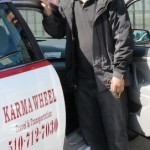 I’ve often said the scariest moments of my life have all been in taxis. Well there haven’t been any really bad ones in 2013, but there have certainly been some taxi encounters. Of course you have to get ripped off by a taxi driver somewhere in your travels and my b...