‘You’ll really see the Singapore-Malaysia contrast if you take the train,’ I was told. ‘Everything in Singapore is constantly being rebuilt and improved but the old train station is totally unchanged, it’s probably even more run down than when you last saw it.’

‘You’ll really see the Singapore-Malaysia contrast if you take the train,’ I was told. ‘Everything in Singapore is constantly being rebuilt and improved but the old train station is totally unchanged, it’s probably even more run down than when you last saw it.’

‘You do realise that going by train takes longer than by bus?’ he continued. ‘Plus with all the low-cost airlines popping up you could probably fly cheaper than by train or bus.’

Well the train certainly should be cheaper than it is. I hate really blatant rip-offs, and the Malaysian railway service (the KTMB – Keretapi Tanah Melayu Berhad), has one out of Singapore. The train fare from Singapore to any station in Malaysia is set at exactly the same number of Singapore dollars as it is in Malaysian ringgit if you’re travelling in the opposite direction. Since the Singapore dollar is worth about 2-1/2 ringgit, you pay way over the odds if you’re travelling my direction.

Blatant rip-offs usually have simple solutions, and I circumvent this one by buying a ticket to Kempas Bahru, just across the border, and another ticket from Kempas Bahru to Kuala Lumpur.
But then I have to find the train station. The MRT doesn’t even run there and my taxi driver thinks it may no longer be in operation. It is, although you have to make a huge loop to get there and then enter through a narrow hole in the wall. It all makes you think rail communications with Malaysia are not a big priority for the Singaporeans. 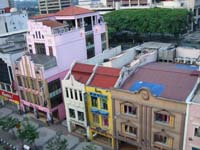 The train leaves half an hour late but it’s comfortable, clean, reasonably modern, has air-con and catches up some of the lost time as it passes numerous little stations, including Kempas Bahru, before arriving at KL Sentral. Not the exotic old KL train station, a colonial-era fantasy of towers, spires, domes and cupolas. 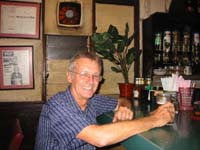 After I find a hotel on the edge of Little India I spend the rest of the afternoon wandering Chinatown, Little India and the colonial district before stopping for a beer in a real colonial relic, the Coliseum Hotel. It’s probably completely unchanged since the day it opened in 1920 or 21.