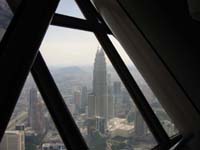 A morning stroll over to the Petronas Towers, for a while the highest building in the world. Who knows, it still may be. But you can only go up to the connecting bridge a third of the way up, and for that you have to get a ticket and come back hours later. So instead I go up the telecommunications KL Tower; you pay but ascend instantly, and to twice as high.

The view is fantastic. From up top Kuala Lumpur is a surprisingly big city with a surprising number of tall buildings, but most surprising of all is that it’s like one of those Mayan ruins rising out of the jungle. Give it 10 years and the jungle could take over again. 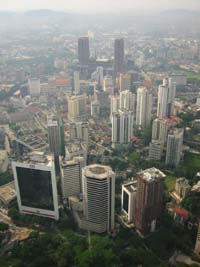 Back at the hotel I grab my bag and head to the chaotic Puduraya bus station to get a bus to Penang. Inside it’s a jumble of little windows all screaming for your attention, but I don’t even get that far. I’m grabbed in the street as I get out of the taxi.

‘I’ll hold it for you,’ the ticket seller announces, yelling down her walkie talkie.

The only problem is when I look at my ticket it says Johor Bahru, back by Singapore; not Butterworth, where you catch the ferry to Penang.

‘No problem, that bus leaving right now as well,’ she responds.

She’s right. I dodge the traffic across the street, go into the bus station, down to Pintu 14 and there’s my bus, revving up and ready to go. Air-con, just three seats across, toilet-equipped, the video isn’t too loud and it’s now a six-lane tollway all the way to Butterworth. No problem at all. 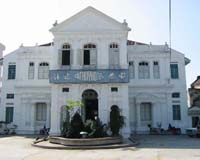 Arriving in Georgetown, the main town on Penang Island, is always a thrill, the short ferry ride across from the mainland and then diving into the city with its fine old shop-houses. I’m staying in the Cheong Fatt Tze Mansion, a beautifully restored old Chinese mansion operated as a hotel but also one of the city’s prime tourist attractions. It’s on Leboh Leith, a street I’ve got fond memories of.

I’ve stayed in several of the old Chinese hotels along the street, including the New China Hotel, our favourite in the early ’70s and still standing although now totally derelict. Across the road is the evocative old Cathay Hotel, which appeared in the movie ‘Beyond Rangoon’. Georgetown stood in quite effectively for Rangoon in that film and I was lucky enough to get invited to the premiere in Los Angeles (Maureen and I were in LA and had met the scriptwriter). Sat behind Nicholas Cage and Patricia Arquette. There’s six degrees of separation for you.