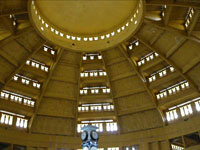 Phnom Penh’s exotic-looking Central Market is the place to change money; the jewellery shops around the market square and the jewellery stands actually under the market dome also handle currency transactions. Thai baht, US dollars and Cambodian riel are all equally acceptable for most expenditure, but regardless of the currency you spend change will probably be given in riel, so you end up with the local currency no matter what you start with. I change all my remaining baht into US dollars. 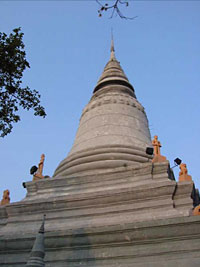 After lunch at the Foreign Correspondents Club (which is nothing of the sort, but it’s a great name and a good place to eat or drink) I spend the afternoon in the National Museum, wandering Wat Phnom (it’s atop the only hill in Phnom Penh) and Wat Ounalom (my text-messaging monk from yesterday’s bus ride was heading to that wat). I’ve seen quite enough of the killing fields and Tuol Sleng on previous visits to Phnom Penh; this time I give the horror stories a miss. 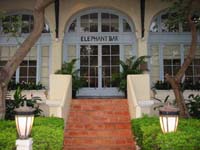 When ‘The Killing Fields’ was made in 1984, Cambodia definitely wasn’t open for film-making, so the much less classically named (although it’s still a classic hotel) Railway Hotel in the old fashioned Hua Hin beach resort in Thailand stood in for the Royal.

The day finishes with another excellent Cambodian meal, this time at Friends, a restaurant set up to employ street kids, many of whom go on to work in other hotels and restaurants.