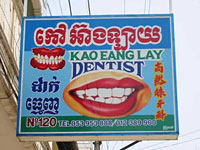 My cheapest night so far (US$4 at the Chhaya Hotel) and I sleep like a baby. Battambang is early to bed (everything shuts down by 10pm) and early to rise (passing cars are beeping at 6.30am).

Soka, a cheerful and unfailingly polite moto (motorcycle taxi) rider, takes me on a morning tour of the country around Battambang. We stop at Wat Kdol, where an elderly monk wants his photograph taken with me outside an amusing French colonial-era building in the monastery grounds. Figures around the outside illustrate various Buddhist characters alternated with French ones: a couple of gendarmes guard the door, and a pot-bellied gentleman in striped pyjamas clutches a revolver. 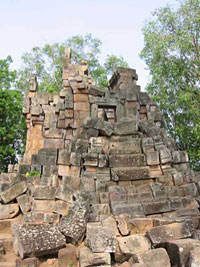 Wat Ek Phnom is the highlight. The guidebook says it’s ‘dilapidated’ and ‘a disappointment after Angkor,’ but if you hadn’t been to Angkor you’d be knocked out by this impressively constructed and beautifully decorated 11th-century temple. Plus I have never seen anything which looks so scarily close to total collapse – it looks like pressure from a little finger could bring 100-ton blocks of stone tumbling down on your head.

Soka keeps up a non-stop commentary on the food possibilities we pass by, and the sight of lemon grass triggers him to tell me the recipe for dog. (It’s best curried with lots of lemon grass and hot chilli.)

There’s a stop for a chat and a palm-juice tasting with a wiry old man climbing down from tapping his palm-sugar tree, but in between monasteries, temples and foods Soka relates his sad story of 1975, the Khmer Rouge Year Zero.

‘I was 20 years old, the youngest of 11 children and we were all taken out to the country from the capital,’ he related. ‘I was sent to Kompong Cham to dig a dam, for four years it was very hard work. Then the Vietnamese pushed the Khmer Rouge out and I returned to Phnom Penh hoping to find my family, but none of them ever returned. I think I was the only one to survive.’ 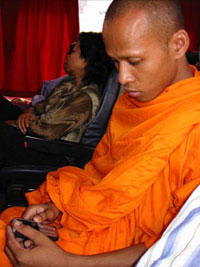 In the afternoon I take the bus to Phnom Penh. We have not been out of mobile phone range for a single kilometre all the way from Singapore, so it’s no surprise when the orange clad monk sitting beside me reaches into the folds of his robe and pulls out his phone to check a text message. He texts back with enviable speed. 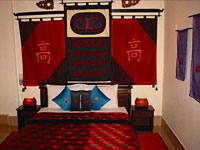 My mobile works as well, and as I pull in to Phnom Penh I call our Cambodia author and local resident, Nick Ray, to get the hot news on where to stay. Try the Hotel Bougainvillier (tel 220528; www.bougainvillierhotel.com; 277 Sisowath Quay) is his suggestion.