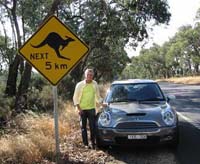 I’ve watched 747s being put together in Seattle, Mazdas roll down the assembly line in Hiroshima and seen far too much beer in production, so when I was in the English midlands I decided to drop in on the Mini production line just outside Oxford. Maureen and I have one (well it’s hers rather than mine).

But I also had another Mini connection. Back in a pre-Lonely Planet lifetime I worked for a couple of years as a car development engineer, and Roger Twiney, my flatmate at the time, stuck with the automobile business and after spells at Ford, Citroёn (in Paris) and Rover (before they went broke) is now the ‘UK Director of Environmental Affairs’ for BMW, who make the Mini. That makes Roger responsible for everything from making Minis in an environmentally friendly fashion to worrying about how to recycle a Rolls Royce (also owned by BMW) at the end of its lifetime. His office is at the Mini plant.

Mini surprises? Well they’re making a lot of them, the car has been a runaway success and they spill off the end of the assembly line at the rate of 38 an hour, just over 200,000 of them in 2005. The ‘Body in White’ production line was the most intriguing area, that’s car speak for the welding together of the panels to produce the complete bodyshell, ready to be painted.

It’s almost entirely automated with robots picking up and moving around panels with amazing precision and what looks like fastidious delicacy. I particularly liked the ‘marriage’ point where the central floor pan was matched to the front and rear assemblies, a process that took half a dozen separate little maneuvers, including holding the panel up to a camera which checked sealant had been properly applied, before the panel was moved back, down, rotated and finally put in place. You half expected the robot to turn round and take a bow.

Human beings are involved in the final assembly line, where it’s always amazing that all the right variations and options end up on the right car and, almost at the end of the assembly line, the correct colour doors, which were detached after the paint shop, finally arrive back with the car before it’s started up and driven away.

You don’t need a friend at BMW to visit the plant and see Minis being made. Check the Mini website for the full story on Mini manufacturing or email Oxford.Plant-Tours@mini.com to put your name down for a tour. Plan ahead, tours are heavily booked.