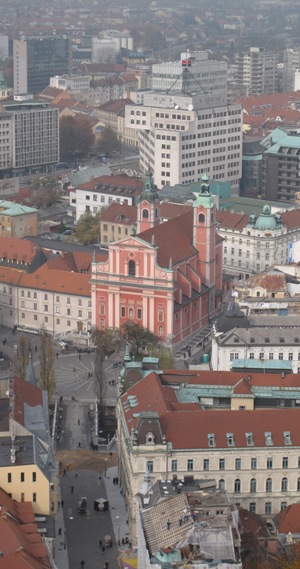 Slovenia is the fourth ‘new’ country I’ve been to in 2009, I started with Malawi when I bicycled a stage of the Tour d’Afrique. Then there were mid-year trips to Costa Rica and the Faroe Islands. Finally I walked across the border from Gorizia in Italy to Nova Gorica in Slovenia. I stayed in the Albergo Transalpina my last night in Italy, my room looked out over the Piazza Transalpina and back in the days of the iron curtain that’s where it was, right in the middle of the square. It’s new Europe, I left the hotel and strolled straight into Slovenia.

A bus took me to Ljubljana a remarkably pretty little city where I did all the Slovenian tourist things including climbing up (well I took the funicular up, I climbed down) to the castle overlooking Prešernov Trg, the town’s main square.

◄  Looking down on the town centre from the castle tower 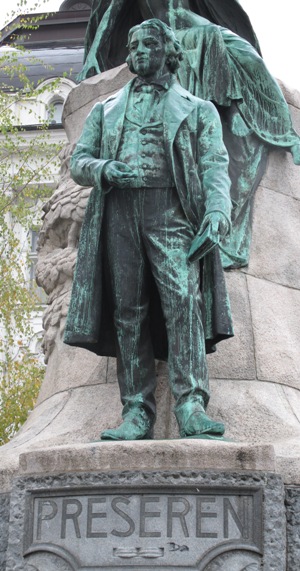 ◄  In the middle of the square is a statue of Slovenia’s greatest poet, France Prešeren.

Leave the square, walk a short distance up Wolfova ulica and you’ll find a terracotta figure of a woman looking out from a ‘window.’ She’s Julija Primic and she’s gazing lovingly across the square at the poet’s statue, although in fact the look should be in the other direction. He was the admirer, she never fell for him and he never got over the rejection.  Presumably the restaurant where I had my very Slovenian dinner that night (pork knuckle) was named after her – Julija. ▼ 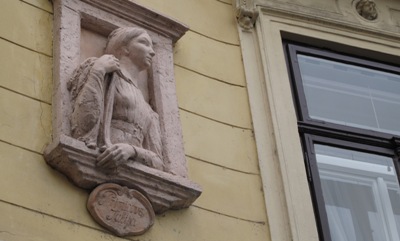 Ljubljana felt remarkably stylish and well off, an impression confirmed in a ‘post Berlin wall’ article in The Economist for 7-13 November, Slovenia has the highest GDP per person amongst the old Soviet bloc countries. Which still leaves it at only just over 60% of the Western European average.