The British National Trust owns the homes just outside Liverpool where John Lennon and Paul McCartney lived when the Beatles first took off. Mendips was John Lennon’s home from 1945 (when he was 5 years old) right up to 1963 (when Please Please Me topped the British charts). Less than one mile away Paul McCartney lived at 20 Forthlin Rd from 1955. 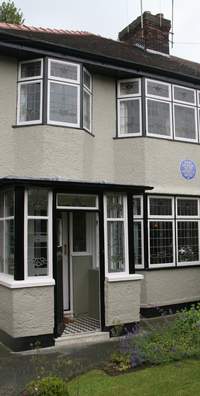 They’re both small, simple little houses although John’s home was definitely a cut above Paul’s. The first time he went there Paul described it as ‘posh!’ If you’re a Beatles fan and you’re in Liverpool, they’re well worth a visit. The National Trust operates a minibus four times a day from Wednesday to Sunday, which picks you up in central Liverpool, takes you to the two houses and drops you back in Liverpool 2-1/2 hours later. There’s a maximum of 14 people on each tour (they are small houses!) so you have to book the £15 tour ahead, you can do it from the National Trust website.

Quite apart from the Beatles connection the houses make a fascinating glimpse into everyday English life nearly 50 years ago. They’ve been authentically restored and refurnished as close as possible to the period. You can check how well that’s been done at the McCartney house because Paul’s brother Michael was a keen photographer and took numerous photos around the house, pictures which capture Lennon-McCartney before they became international stars.