No country in South-East Asia is as cut off from the outside world as Burma. It’s a combination of the country’s own deliberate isolation and international sanctions. As a result this is the only country in the region where McDonalds has yet to arrive. Nor will you find an ATM machine in the country, in fact the British Embassy reports that the number one problem British nationals come to them with is money. Bring cash, US dollars as the first choice, euros as a second, or plan on flying back to Bangkok to find an ATM!

Certainly the traffic on the roads hasn’t changed much over the years. This well loaded truck full of pilgrims arriving at the Thanboddhay Paya is a standard sight. 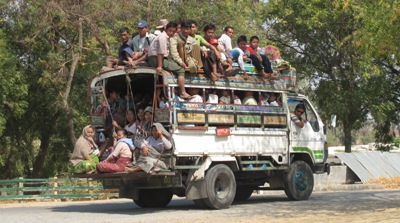 There’s generally somebody hanging off the back and/or sitting on the roof of any vehicle you pass on the road as well. 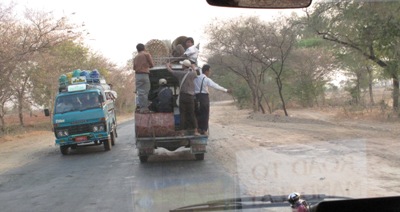 On the other hand mobile phones have arrived in Burma in a big way. The current edition of our Burma book comments that it’s remarkable how many cell phones you see in Burma, given that a SIM card alone cost US$1000! An NGO doctor I met said that he’d avoided getting a phone, until the aftermath of Cyclone Nargis in 2008 meant he had to have one and it was even more expensive, US$2000. Furthermore any visitors coming in to the country had to declare their phone to customs, even though it wouldn’t work. 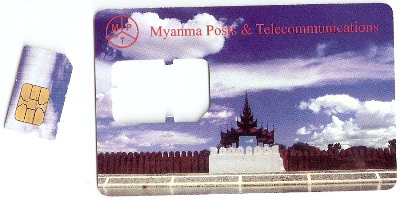 That’s all changed, you can now buy a ‘one time’ SIM card for US$20. Effectively the card is free, it includes US$20 of call time, but you have 30 days to use it. The SIM card gives you a local number, but it cannot be extended or topped up. For most visitors that’s just fine, I popped this card into my iPhone and I could make overseas calls for 90 cents (versus the US$5 or 6 it used to cost from a call centre) or send text messages for 5 cents.