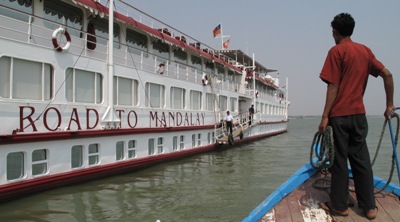 My recent Burma travels took me from Bagan to Mandalay, with assorted stops along the way, on the Road to Mandalay. The riverboat started life on the Rhine in Europe before being shifted to Burma by the Orient Express company in 1995.

Cyclone Nargis in 2008 bent it pretzel shaped – it was down in Rangoon for its annual service at the time. It took a year to repair and comprehensively overhaul the ship which is now back in regular service. Our trip started with a visit to Bagan and included a day spent exploring the sights around Monywa, an area of Burma I’d not previously visited. Just watching the river drift by was a never ending source of interest although the number of barges laden down with teak logs that floated past us, heading downriver to Rangoon, was seriously worrying. 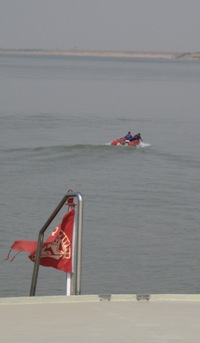 Navigating the Irrawaddy (or the Ayeyarwaddy as it has been renamed) is a serious business. The river is often very shallow and it’s constantly changing course. We had a pilot on board for the whole trip, each river pilot knows his own stretch of river and boats moving up and downstream pick them up and drop them off as they go along. It was well into the dry season and when we came to very shallow stretches a Zodiac was sent out ahead with a crewman wielding a long pole to check the river depth.

The high point of the trip came one night when were ushered on to the top deck. Ahead of us we could see a string of coloured lights spanning the river. A village lit up for some festival? Brightly lit fishing boats? No, it was floating lanterns, launched on the river just for us, just like Thailand’s Loi Krathong where sections of banana plant trunk float past carrying candles. As the lights floated down towards us they spread across and along the river and then drifted past into the distance. It was incredibly beautiful.