I’m in Alaska travelling with an LPTV film crew making a program for the forthcoming Roads Less Travelled series with National Geographic. Having got to Whittier I’m now heading up to the Wrangell-St Elias National Park.

The first step is the Alaska Marine Highway ferry across Prince William Sound to Valdez. In a state where roads can end somewhat abruptly the AMH ferries are treated like an extension of the road system and you get the same amazing views as you would on a cruise ship, but at a rather lower cost. So I see icebergs breaking off from the Columbia Glacier, sea lions and otters and plenty of great views before we dock in Valdez. On Good Friday 1964 Valdez was pretty much wiped out by an earthquake and 25 years later on Good Friday 1989 it was devastated again, this time by the gigantic Exxon Valdez oil spill. 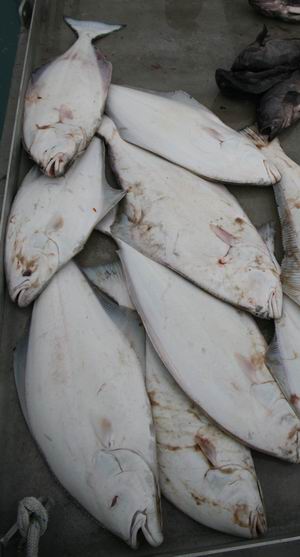 I’m in Valdez long enough to meet a local fishing crew landing their catch, including some very healthy size halibut. So I have halibut for dinner in a local restaurant.

Halibut landed at the harbour in Valdez 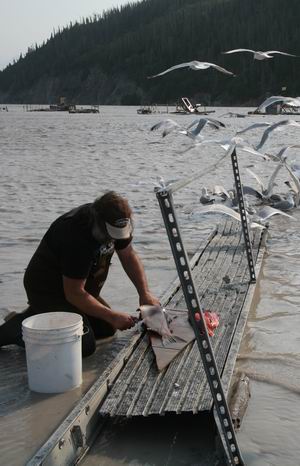 Then it’s on the road to Chitina and a visit to a fish wheel, an Alaskan invention that I guess you could define as an ‘automatic salmon catcher.’ The river flow turns the wheel around and passing salmon are simply flipped into a holding tank. Tom, a Chitina local, takes me out to see what his wheel has caught – answer some Copper River reds, claimed to be the best wild salmon in the world.

The main street of McCarthy

Finally it’s 60 miles along the rough and ready McCarthy Rd following an abandoned railway route with a couple of fine old bridges, one of them still in use, to McCarthy. A forgotten ghost town, McCarthy has bounced back in recent years, a place where you’ll find ‘red neck hippies.’ After all Alaska is a place where ‘a liberal is a person who carries something smaller than a .357.’