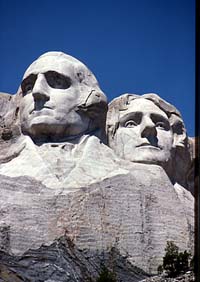 The Black Hills, in the north-west corner of South Dakota, are an amazing blend of scenery good enough to make your mouth water and crass commercialism awful enough to make you throw up. Stretches of road through state and national parks are a delight to the eye but they’re quickly followed by what could be equally beautiful stretches utterly ruined by a non-stop parade of billboards and ugly tourist developments.

.
Fortunately the good stuff is good enough to overpower, most of the time, the inspired ugliness. Keystone is soon forgotten when you climb the hill to Mt Rushmore, every bit as stunning a scene as we’ve ever been led to believe.

Having soaked up this monumental piece of  stone sculpture it’s only a few more miles to an even more awesome piece of mountain recycling, if it ever gets finished, the Crazy Horse Mountain. The plan here is to convert a mountain into a Native American reply to the presidents of  Mt Rushmore.

There’s no doubt it’s an awesome piece of work but at the end of a visit one’s left with a nagging concern that it could easily skitter from being a monolith even more amazing than Rushmore to an amazing monument to bad taste. And whichever way it ends up I sincerely hope that no further crazes develop for converting mountains into sculptures.

We continue south then loop back north through Wind Cave and Custer parks, passing prairie dog towns and herds of buffalo. This is precisely the sort of route our venerable vehicle is not fond of. The steep uphill bits are a distinct trial for its well worn old engine and they’re inevitably followed by steep downhill bits which are an even greater trial for its less than comforting, even when they were brand new, brakes. Couple that with its wallowing behavior around sharp corners and you soon wish you were in something more modern and nimble, or out on the open roads which are the Caddy’s forte.

The final descent back towards Rushmore include several tunnels, cunningly cut to frame a view of the presidential profiles. Continuing north we skirt Rushmore and Rapid City to Deadwood, our intended stop for the night. Except everything in Deadwood is full up. We waste over an hour driving by no vacany signs and enquiring fruitlessly at signless places before one remote motel owner decides he’s going to find us a room come hell or high water. And he does, in nearby Spearfish so a hearty thanks to the Ponderosa Inn even though we don’t get to stay there.

Deadwood turns out to be much more interesting looking when you’re just driving through it than it is in reality. Reality turns out to be just a long line of little casinos, a mini-Vegas without all the showbiz. After an uninspiring Italian meal we catch the nightly performance of the trial of Jack McCall, who shot Wild Bill Hicock in the back in the number 10 saloon on Deadwood’s main street. From there we drive to our Spearfish haven and collapse, all of us exhausted.