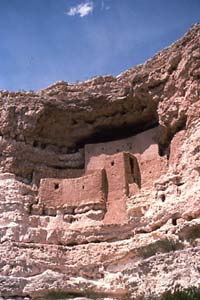 For the second time the Caddy won’t start. I think it might be a result of parking it on steep cambers but this time I know how to handle it. A short backtrack takes us to Walnut Canyon National Monument, another series of Sinagua ruins, neatly situated around the walls of a canyon. We take a stretch of the old Route 66 back into Flagstaff then head south through oh-so-trendy Sedona. There’s another Sinagua ruin to visit, the imposing and fortress-like, though misnamed, Montezuma’s Castle.

My son Kieran’s one request for this trans-continental trip was to catch an NBA basketball game. The Phoenix Suns are playing at home tonight and I manage to line up some tickets. Just go to the hot dog stand run by Sean, across from the stadium. Ask him to point out Marty, says Marty, I’ll have your tickets.

To make it an evening of all-American culture we go for burgers at Hooters first, then stroll over to the America West Arena where Sean does indeed run the hot dog stand, Marty is indeed standing there with our tickets, and the Suns beat the Nuggets. The two guys sitting behind us are just as entertaining as the game. They maintain a non-stop commentary, criticise every single decision by the referees, advise the players on how they could improve their game and generally keep us amused from start to finish.