Ganvie, just outside Cotonou, is remarkably like Inle Lake in Burma, with its houses, fields, life all out on the water. The big difference is that Ganvie is very touristy, particularly when you’re in a big tourist group like ours.

Generally our group has been chopped into smaller sub-groups or the fact that there are nearly 40 of us doesn’t make a big difference; today the whole thing teeters on the edge of degenerating into a circus.

Back in the bus, we drive to the airport, jump in the plane and make the short flight across Togo to Accra in Ghana. Better off (in feel at least) then Benin, Ghana is also very crowded. The drive to Elmina near Cape Coast takes an interminable five hours, the first hour just getting a few km from the airport through an Accra traffic snarl.

Ghana is also clearly very Christian and God-fearing, reflected in the business names I spot along the way: 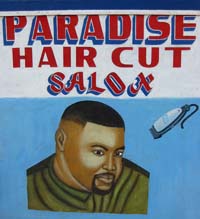 The last was my favourite but I was really hoping to see a ‘Jah Gives & Jah Takes Away’ investment centre.

My sundowner beer, during a protracted power blackout, reminded me of the Ghanian coffin exhibit at the National Museum of Ethnology near Osaka in Japan where I’d been just a couple of months earlier. The Ghanians like exotic coffins and one of them was a three metre high wooden beer bottle. 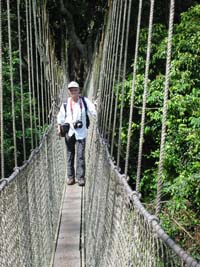 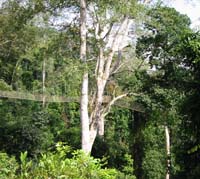 Afternoon – look around St George’s Castle, built by the Portuguese, captured by the Dutch, handed on to the British and with a horrific history as a holding station for slaves before they were despatched to the Americas. There’s time for a short stroll around Elmina itself. The town is shabby and in need of some maintenance, renovation and tidying up but there’s a very colourful harbour and fish market and lots of interesting old buildings which could easily turn it into quite a tourist centre.

Saturday 19 November
Day 15 – Elmina to Accra to Mopti, Mali
Our hotel in Elmina is not always very efficient. Our laundry should have been back at 8 pm last night, but we’re still waiting for it at 5.15 am, when we were supposed to be out of our rooms and ready to go at 5.00. It does finally turn up and we follow the long traffic jam back to Accra and head north to Mali.

Our aircraft, despite its turboprop engines, refitted cabin and more modern instrumentation still has a three man crew (well two men and a woman, the co-pilot is female) including a flight engineer. The catering is also from an earlier era. While we’ve been touristing Vivienne and Carol have been shopping for supplies and borrowing their hotel’s kitchen to put together our excellent lunch of chicken tikka and pita bread with salad. 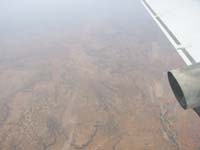 We cross the Volta River into Burkina Faso (it used to be Upper Volta), skirt to the west of that engagingly named capital Ouagadougou and arrive at Mopti, at the junction of the Niger and Bani Rivers in Mali. Maureen and I do a quick wander around the town centre before we cruise off in a pirogue to catch the riverside life, which includes some very heavily loaded passenger boats heading far up or down the river. Our little voyage includes a sunset wander around the small village of Nantaga, complete with a very picturesque mud-built mosque with the requisite ostrich-egg-topped corner-spires.

Sunday 20 November
Day 16 – From Mopti an excursion to Dogon Country, Mali
One day is far too short to explore the fascinating Dogon region of Mali with its curious villages and colourful inhabitants, but we get a good taste. In fact this whole trip is like series of tastings, rarely a satisfying meal. 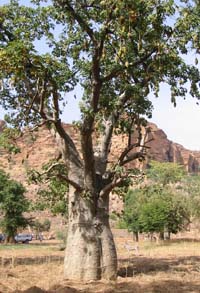 En route to the steep escarpment which delineates the centre line of the Dogon region we pass some fine specimens of that unusual tree the baobab. I’d got into my head that the baobab, with its stubby-bottle-shaped trunk and hands-up-fright branches, was only found in southeast Africa, Madagascar and as the closely related boab in Western Australia (we love to shorten everything in Australia). Then we encountered baobabs in Ethiopia earlier this year and here they are well over to the west and on the fringe of the Sahara. The Dogon people ring bark them to make cloth and rope but it doesn’t seem to damage them. 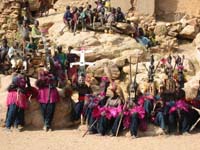 We enjoy the view over Banami and explore Anami, both perched at the bottom of the escarpment, and then stop for an extraordinarily colourful Dama masked dance, usually performed at the end of a funeral, in the village of Tireli.

Once again it’s after sunset by the time we get back to the very pleasant Kanaga Hotel (my favourite hotel of the whole trip so far) in Mopti. I’d caught sunrise in the Mopti long distance taxi stand. I’ve been collecting photographs of cars that seem to epitomise a country or region, the Paykans of Iran, the old Fiat 500s of southern Italy, the Trabants of the old East Germany, the Hindustan Ambassadors of India, the American cars of the 50s in Cuba, and the Peugeot 504 is certainly the car of Africa. There’s a fine fleet of them in Mopti, leavened with a few surviving 404s and some of the less popular
505.

Monday 21 November
Day 17 – From Mopti an excursion to Djenne & on to Timbuktu
If yesterday was a tasting plate today is a real degustation menu and once again I’m blown away by the organisation that makes It possible to pack so much in to a day. At the Bani River crossing just outside Djenne there’s quite a line up of cars, buses and trucks waiting for the ferry, but we skip straight to the front of the line because there’s a second ferry which we appear to have chartered for our own use. It saves at least an hour. 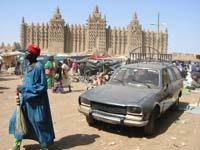 Market day in Djenne looks fantastic. I’ve already decided that Mali is to Africa as a whole as Rajasthan is to India, the most dramatically colourful place in what’s already a kaleidoscope. Market day alone would make the visit worthwhile but Djenne is also Mali’s superlative mosque, a fantasy of mud-built architecture which qualifies as the largest mud building in the world. 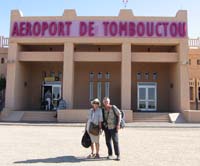 Back across the river and back in Mopti jump on our ever-ready plane and head north to the iconic locale for this trip: Timbuktu.

Of course it’s the mouth watering name which is the big attraction, I was quite aware that the reality was a dusty, down-at-heel, little back-of-beyond sprawl, but we continue to move at high speed, dumping our bags at the hotel and heading straight out into the desert for some Tuareg entertainment involving a lot of camels, singing and dancing. 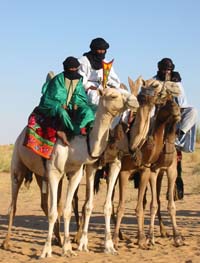 All the people of Mali have been unusually handsome and always impressively attired but the Tuareg, the ‘blue people’ of the Sahara from their indigo-dyed clothing, take Mali style to an even higher level. Supposedly barbecuing a few sheep is the principal attraction to bring the Tuareg out for our gathering, certainly the dancing goes on at the same pace whether the tourists are paying attention or not.

Our group are remarkably early-to-bedders, even allowing for our early starting schedule, and tonight is no exception. Only a handful of us party on, enjoying the brilliant sweep of the Milky Way, Orion rising above the horizon and the occasional streak of a falling meteorite across the inky sky.