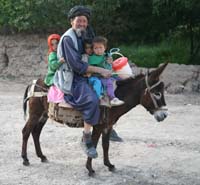 It’s a 5 am start on the trip to the Minaret of Jam, which means we see the sun rise half an hour down the road. The early departure is a good idea, the 289km trip takes nearly 15 hours on consistently rough roads. There’s plenty to see along the way, a wide flat valley dotted with villages for the first few hours; stops at chaikhannas, traditional Afghan teahouses, for breakfast and lunch; a long abandoned caravanserai and a decaying fortress; the beautiful ancient gumbads or ‘domes’ at Chisht-e-Sharif and finally a series of pretty little villages wedged into corners of canyons and valleys.

It’s dark by the time we arrive at the guest house directly beneath the great minaret so my first sight of the Afghanistan’s first World Heritage site is in the morning. The Statue of Liberty, Eiffel Tower, Taj Mahal or Sydney Opera house get thousands of visitors every day but the Minaret of Jam has to wait until late May for the year’s first arrival. I am 2006’s first tourist!

Hidden away at the junction of two rivers and beneath towering canyon walls the minaret is big, beautiful and mysterious. Only the Qutb Minar in Delhi stands taller (or did until the Hassan II mosque in Casablanca was built recently) and it’s remarkably well preserved, apart from its Pisa-like lean, despite the eight centuries it has stood beside the Hari Rud river. But why here and for what purpose? If it was a minaret where was the mosque? And if it was a victory tower, like the Qutb Minar, why build it so far from any habitation?

We spend a day exploring the area around the minaret, climbing the surrounding hills for views from above, crossing the river on a flying fox to check the view from the other side and finally climbing the spiral stairway inside. Even that’s a mystery, there are two totally separate stairways, clockwise and anti-clockwise, but they disappear below ground level, today you enter through a head-high hole in the minaret.

This is clearly something for future archaeologists to investigate. And conveniently the Lonely Planet Foundation is helping to fund the Minaret of Jam Archaeological Project which will be returning to Jam for a second time late this year.